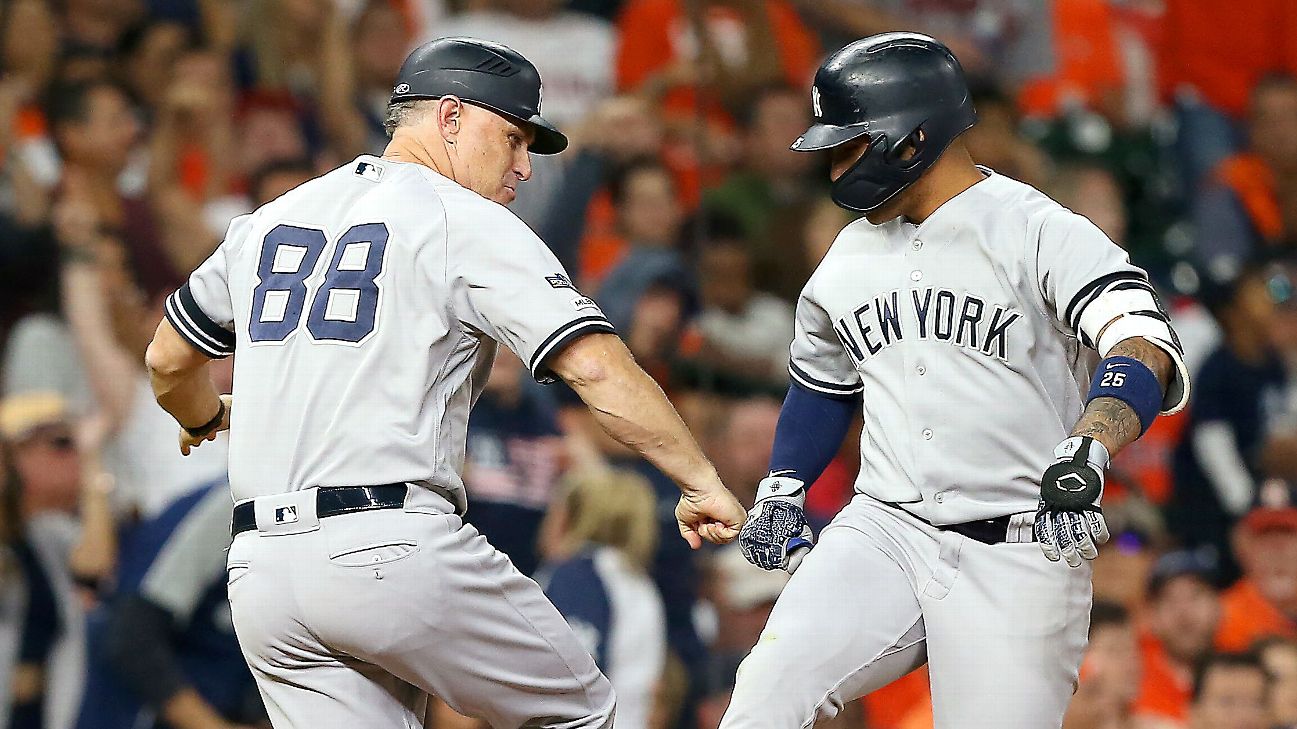 While the New York Yankees busted out the big bats in Game 1 of the American League Championship Series on Saturday to earn an initial advantage over the Houston Astros, the Washington Nationals sewed up a 2-0 lead in their series to head back home with a daunting National League Championship Series edge over the St. Louis Cardinals. Can the Yankees repeat that feat Sunday and seize that same lead on the road in Houston?

The most important thing of the day: As David Schoenfield noted in his report of the Cardinals' sorry situation, you do not want to be a team down 2-0 after starting your best-of-seven series at home. Only three of 25 teams in that situation have come back to win. So, no extra pressure, Houston, but you're better off not trying to be the fourth while going to the Bronx. And no team has done it since the 1996 Yankees pulled this particular trick against theAtlanta Bravesin the World Series.

HOUSTON -- The orange rally towels were out in force for Game 1 of the ALCS, but, alas, there were no rallies from the home team -- just from the visiting one. Astros fans will be expecting a much different result in Game 2 -- with Justin Verlander on the mound and a lineup that now needs to pick itself up off the mat. -- Matt Marrone

A stat to impress your friends: The Cardinals' woeful total of four hits through their first two games in the NLCS matches the fewest hits by a team in any two-game span within a postseason, per Elias Sports Bureau research. The Brooklyn Dodgers had four hits combined in Games 5 and 6 of the 1956 World Series; Game 5 was Don Larsen's perfect game for the Yankees.

Though 2019 Cy Young candidate Verlander has dominated the Yankees and is 4-0 with a 2.33 ERA in six postseason starts, including two in the 2017 ALCS with the Astros, the Bronx Bombers should be able to come out on top by the long ball, which has been the right-hander's Achilles' heel this season. Yankees 9, Astros 7 -- Marly Rivera

Stud of the night:Max Scherzertook a no-hitter into the seventh inning against the Cardinals in the second game -- and second consecutive serious no-hit threat by a Nationals pitcher -- of the NLCS.

Dud of the night: Did the Astros have to take their cue from the Cardinals for LCS offense? Houston managed only three hits of its own at home, and hit into exactly that many double plays without recording any extra-base hits.

Social media says: Let's just say that Gleyber Torres' dad was into seeing his son go nuts at the plate in Game 1 in Houston ...

Quote of note:"Max Scherzer can shut out the best offense in baseball any given night, and today he was really good." --Cardinals infielder Matt Carpenter after the Nats won Game 2.

Best of the playoffs so far ...

Our running postseason MVP: There are a lot of ways to break down the dominance of Astros starter Gerrit Cole so far -- a 0.57 ERA and 0.57 WHIP, 25 strikeouts, 3 walks, 6 hits allowed over 15 innings, including eight stifling innings in Game 5 against the Rays. Then there's this: Cole joins Mike Mussina in the 1997 ALCS as the only pitchers with at least 25 strikeouts and one or fewer runs allowed in a single series in postseason history.

The play of this October: We're going to cheat and make this "plays": the back-to-back home runs by the Nationals' Anthony Rendon andJuan Sotooff the Dodgers' Clayton Kershaw in the eighth inning of Game 5 of the National League Division Series. Kershaw in the wake of Soto's tying bomb could end up as the lasting image of these playoffs.

Game of the postseason so far: Nationals-Dodgers, Game 5 of the NLDS. The Dodgers ambushing Stephen Strasburg, Strasburg settling down and keeping the Nats in it, Walker Buehler's mastery, Kershaw's big strikeout before his eighth-inning implosion, Howie Kendrick's 10th-inning slam, questions for Dodgers manager Dave Roberts. There's a lot to unpack here, and this was a true postseason classic. 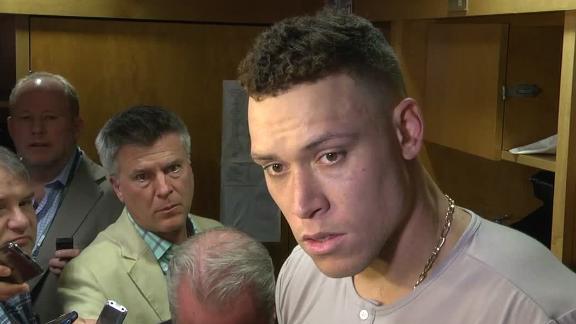 Judge describes emotions of Game 1 win
Aaron Judge reflects on a big team win and how good DJ LeMahieu was on defense, especially being able to make the pick on Judge's throw to first. 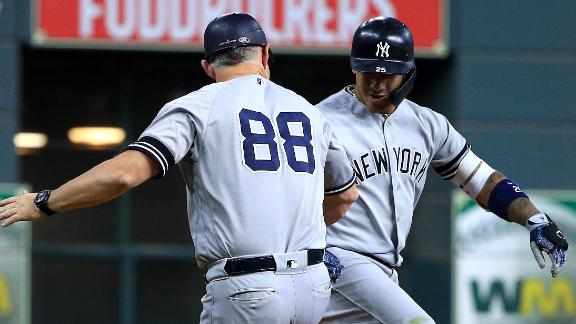