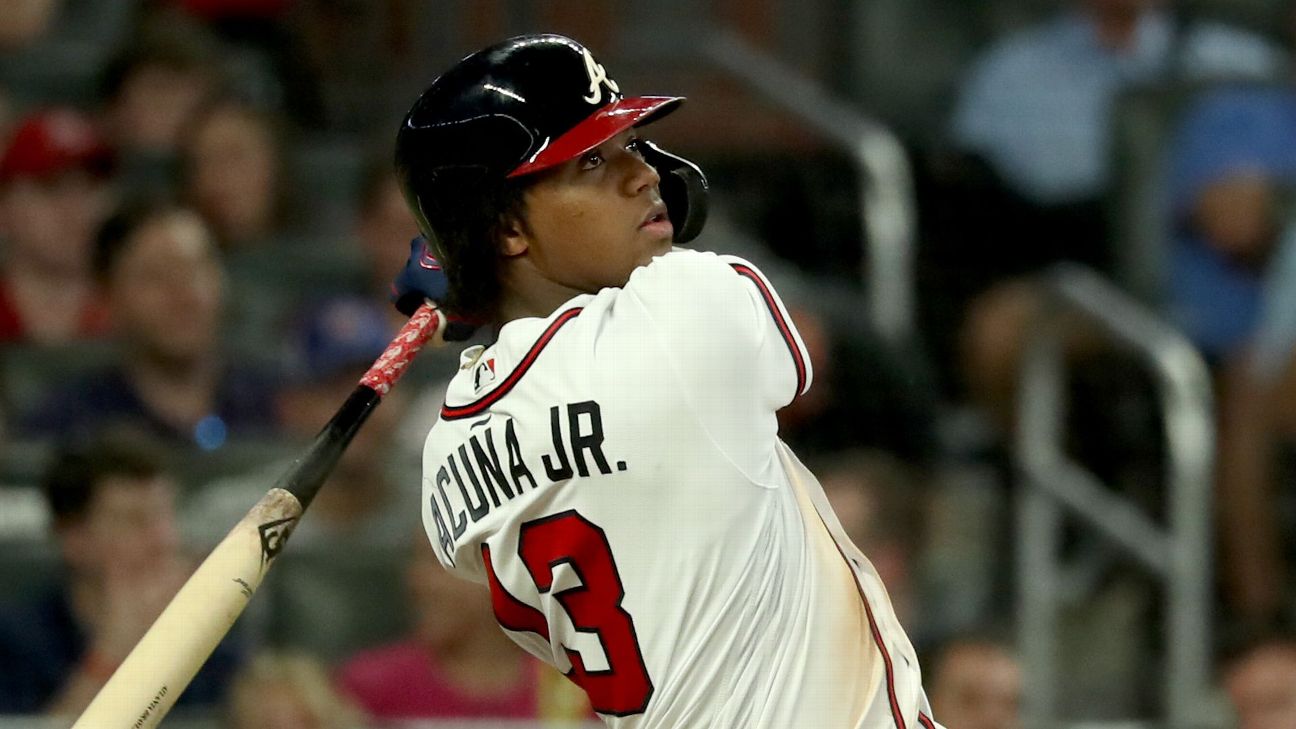 ESPN
By David Schoenfield
The story of the 2019 baseball season has been all the home runs. Pick your favorite storyline and there's a good chance it circles back to home runs in some fashion: Twins, Yankees, Pete Alonso, Cody Bellinger and Christian Yelich, Ronald Acuna Jr. hitting 41 at age 21, Alex Bregman, Yordan Alvarez and so on. Many of your least favorite storylines also circle back to home runs: the Orioles, Gleyber Torres versus the Orioles, the Nationals' bullpen, the Astros playing consecutive games with scores of 21-1, 15-0 and 21-7 ... Craig Kimbrel (sorry, Cubs fans).

It computes, then, that a major plotline of the 2019 postseason will be home runs. The team that wins will hit a bunch of them and prevent their opponents from hitting too many of them. Let's dig into what we might see this October.

There WILL be a lot of home runs

Unless Those In Charge dig out old boxes of 2014 balls from a storage bin at Kauffman Stadium, the postseason will be played with the same lively ball we've seen all season. Yes, we'll see much better pitching in October, but history suggests we'll still see plenty of home runs at rates similar to the regular-season clip, no matter who is pitching.

The old adage is that good pitching beats good hitting. Because of that, you often hear broadcasters say that teams can't rely on the home run in the postseason -- at least not to the same extent that they do in the regular season -- so teams should invoke more one-run strategies, or that teams that string together hits will fare better.

Here's another way to look at it. The percentage of runs that score via home runs:

If 2017, the season with the second-most home runs in history, is any indication of how the 2019 postseason will unfold, then the long ball will drive scoring even more.

Home runs are the most important plays of the postseason

The website thebaseballgauge.com tracks a statistic it calls championship win probability added -- basically, the most important plays of the postseason, factoring in game, series and specific score information at the time of the play. The biggest play last year was Yasiel Puig's three-run homer in Game 7 of the National League Championship Series that turned a 2-1 Dodgers lead into a decisive 5-1 edge in the sixth inning, a play given a CWPA score of .127. Puig's hit improved the Dodgers' chances of winning the World Series by 12.7% (because it basically guaranteed them a trip to the World Series).

How about 2017? The top play was Jose Altuve's three-run homer in Game 5 of the World Series, turning a 7-4 Astros deficit in the fifth inning into a tie game. Six of the 10 most important plays that postseason were home runs.

And 2016? The top play was Rajai Davis' clutch two-run home run in the bottom of the eighth inning of Game 7 for the Indians against the Cubs, tying the game and giving Cleveland hope. Ben Zobrist's go-ahead double in the 10th inning was No. 2. The top 10 plays that postseason were all in Game 7 of the World Series, including home runs from Dexter Fowler and David Ross.

What about 2015? Top-play honors went to Alex Gordon for his game-tying home run in the ninth inning of Game 1 of the World Series. That saved the day as the Royals would eventually win that game in extra innings. Three of the top 10 overall were home runs.

And in 2014? The most important play was the final one of Game 7 of the World Series: Madison Bumgarner getting Salvador Perez to pop out with the tying run at third base. In 2014, none of the top 10 plays was a home run -- mostly because eight of the top 10 came from Game 7 and there were no home runs in that game.

Still not convinced? There were 33 postseason games in 2018. Eliminate the 10 in which teams hit the same number of home runs and the team that hit more home runs went 19-4 in the other 23 games.

Nothing against small ball or four-hit rallies or driving in the runner from second with two outs -- those can and will still be important aspects of winning -- but in the postseason, you win by hitting home runs.

Digging into the 2019 home run numbers

The top five home run teams in 2019 -- the Yankees, Twins, Astros, Dodgers and A's -- all made the playoffs. Seven of the top 10 home run teams made it to the tournament. The Yankees and Twins topped 300 home runs, and the Astros and Dodgers also surpassed the previous single-season team record, set last year by the Yankees.

The only two playoff teams not to rank in the top half of the majors in home runs are the Rays and Cardinals -- and both still topped 200 home runs, a total only one team reached back in 2014. The Cardinals hit 200 home runs for just the sixth time in franchise history, while the Rays hit the second most in franchise history. All 10 playoff teams can hit the ball over the fence.

Not all playoff teams played the same set of opponents, however. I was curious to see which teams pumped up their home run totals against bad teams -- especially in the American League, where the split between good and bad teams created a deeply divided league. Perhaps not surprisingly, the Twins benefited from beating up on the pitching staffs of the White Sox, Royals and Tigers. Here is each team's rate of at-bats per home run against teams above .500 and below .500 (through Friday):

The Twins hit .287/.354/.532 against bad teams and .248/.318/.443 against good teams. Their high-powered offense looks a little less imposing when viewed in this context. True, the Astros and Yankees also decline, but not to the same extent. The Braves actually hit a little better against good teams (although they hit just .216/.251/.366 in six games against the Dodgers).

Note in particular that the Astros weren't that impressive against hard stuff.

That's just home run rate. If we sort by overall wOBA against pitches thrown 95-plus, Cruz, Pederson and Kolten Wong rank 1-2-3 in the majors, with Muncy, Fowler, Freeman and Alex Bregman in the top 10.

Who struggles against big velocity? Houston's Josh Reddick hit .140/.220/.200 with no home runs. Tommy Pham, Michael Brantley and Lorenzo Cain also didn't hit a single home run against 95-plus, although all three hit for a decent batting average. Here are some other interesting names who struggled against 95-plus:

Acuna is also an interesting guy to watch here. He was the ultimate hit-or-miss against big velo: He hit .184, although with seven home runs, in 125 at-bats.

Who gives up home runs? Looking at pitchers with at least 100 innings, the three with the highest home run rates are all Yankees: CC Sabathia, Domingo German and J.A. Happ. German is suspended for the postseason, however, and Sabathia will likely pitch out of the bullpen. Also ranking among the 10 worst among the playoff pitchers: Justin Verlander and Clayton Kershaw. Obviously, both are otherwise tough to hit -- Verlander allowed a .172 average and Kershaw .223 -- but they are vulnerable to the home run.

On the other end of the spectrum are the starters who are stingy with the long ball. Charlie Morton, Mike Soroka and Jake Odorizzi rank 1-2-3 in this area. Morton, who will start the wild-card game for the Rays, allowed just 15 home runs in 194 innings. Soroka has allowed just 13 in 169 innings. Jack Flaherty struggled early with the home run, but one reason for his second-half dominance is that he cut way down on the long ball, with just five in 14 starts after the All-Star break.

Among relievers, Milwaukee's Josh Hader fanned a remarkable 16.4 batters per nine innings, but he allowed 14 home runs in 74 innings. He was much better in September after struggling in July and August, when he allowed seven home runs and a .250/.315/.560 line while blowing five saves.

The Cardinals' Andrew Miller had that monster postseason for Cleveland in 2016, but he has also been vulnerable, with 11 home runs in 54 innings. That's one reason manager Mike Shildt has deployed him in short stints, as he made 72 appearances for those 54 innings. The Cardinals' bullpen has been very good overall, however, and has the lowest home run rate -- tied with Oakland -- of the playoff teams.

At the bottom of that list? Not surprisingly, the Nationals' wretched pen that ranked 25th in the majors with a 3.9% home run rate. But note the team just ahead of them at 24th: the Astros. Roberto Osuna (2.77 ERA), Ryan Pressly (2.36 ERA) and Will Harris (1.51 ERA) have been an excellent 1-2-3 punch at the back end, but if A.J. Hinch has to dig into his second-tier relievers such as Hector Rondon, Chris Devenski and Josh James, that group is more vulnerable to the home run.

Teammate Miguel Sano was third in home run rate, with 34 in 378 at-bats. He's all or nothing with his 36% strikeout rate, but averaged a big bomb every 11 at-bats.

Springer's season has sort of been lost in the Bregman/Verlander/Gerrit Cole spotlight, but he mashed a career-high 38 home runs and has 11 home runs in 32 career postseason games -- including nine in his past 15 going back to the 2017 World Series.

Oh, and teammate Jose Altuve was red-hot in the second half, hitting .320 with 20 home runs, eight in the majors after the All-Star break.

A's shortstop Marcus Semien was a surprise power source with 33 on the season -- 19 in the second half.

Rays outfielder Austin Meadows made the All-Star team but was even better in the second half with 21 home runs.

Maybe those guys will prove to be October heroes. Or maybe it will be the MVP candidates, Bellinger and Bregman and Anthony Rendon. Or, in the year of the long ball, it could be anybody. After all, it does seem like every player can mash one over the fence these days.