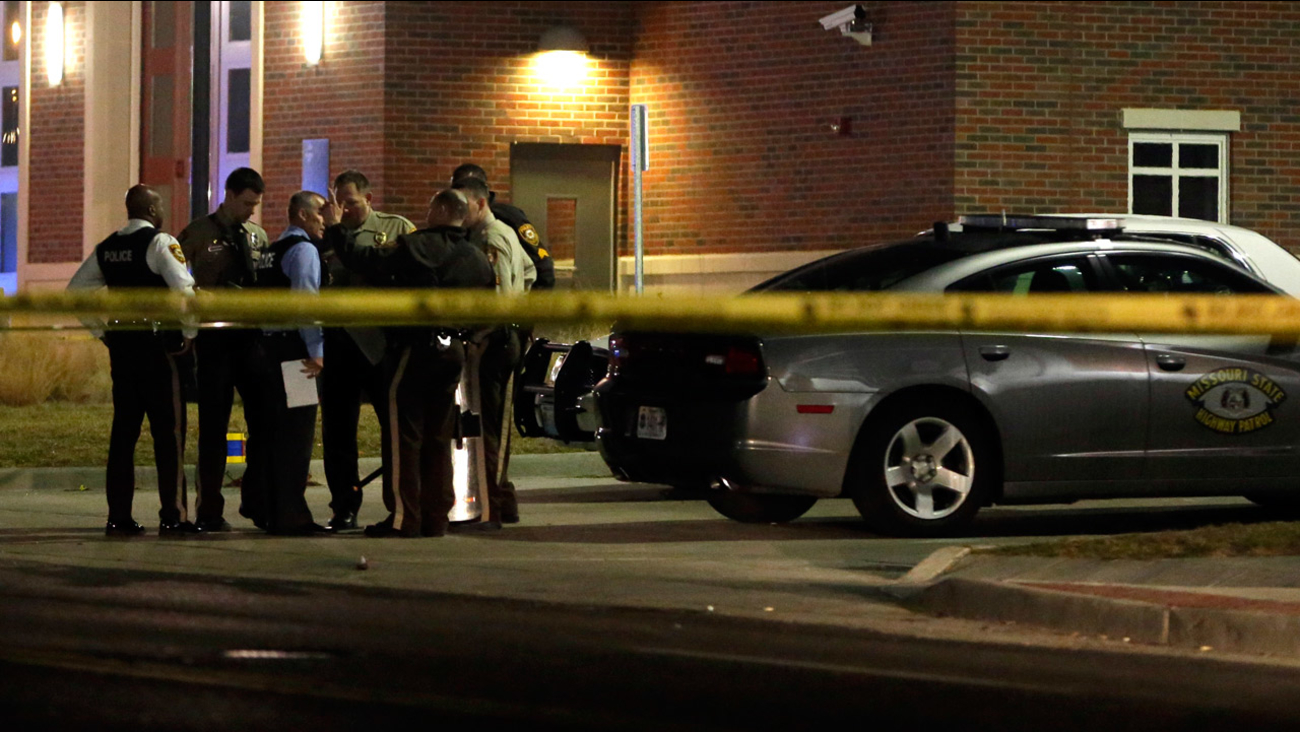 FERGUSON, MO -- Two officers were shot in front of the Ferguson Police Department early Thursday while demonstrators were gathered across the street - an attack the county police chief described as "an ambush" that could easily have killed both men.

The shots were fired just as a small crowd of protesters began to break up after holding a demonstration in the wake of the resignation of the Ferguson police chief, who stepped down Wednesday.

St. Louis County Police Chief Jon Belmar said one officer was shot in the face, just below his right eye, with the bullet lodging behind his ear. The other officer was hit in the shoulder, and the bullet came out his back.

Both men were expected to recover without suffering any long-term damage, Belmar said, but the wounds might have been mortal.

"We could have buried two police officers next week over this," he said.

The 32-year-old officer who was shot in the face was from nearby Webster Groves. The second officer, 41, came from the St. Louis County force.

Both were taken to a hospital, where Belmar said they were conscious.

Authorities believe the shots came from a handgun fired about 120 yards away. There were no suspects in custody.

Based on where the officers were standing and the trajectory of the bullets, the shots appeared to be aimed directed at the police, Belmar said.

"This is really an ambush," he said. "You are basically defenseless. It is hard to guard against."

Asked whether the gunman played any part in the protest, Belmar said he was "very confident that whoever did this was there for the wrong reasons."

"There was an unfortunate association with the gathering," he added.

The protest unfolded just hours after Ferguson announced that Police Chief Tom Jackson would resign. His resignation followed that of City Manager John Shaw earlier in the week.

The protest was a familiar scene in Ferguson, which saw similar and much larger demonstrations after the shooting death of black 18-year-old Michael Brown last summer by city police officer Darren Wilson. A state grand jury cleared Wilson, who is white, in November, sparking further protests, looting and fires. But Thursday morning was the first time an officer at a protest had been shot.

In amateur video accessed by the Associated Press, two shots ring out and a man is heard screaming out in pain.

Someone at the scene, unseen and unidentified in the video, says: "Acknowledgement nine months ago would have kept that from happening."

Marciay Pitchford, 20, was among the protesters. She told The Associated Press that the protest had been mostly peaceful until she heard the shots.

"I saw the officer go down and the other police officers drew their guns while other officers dragged the injured officer away," Pitchford said. "All of a sudden everybody started running or dropping to the ground."

Belmar said the shots were fired from across the street from the police department.

After the shooting, officers with guns and in riot gear encircled the station, and more than a dozen squad cars blocked the street.

U.S. Sen. Claire McCaskill urged "healing and reform," calling the shooting a "criminal act that jeopardized the lives of police officers and protesters both."

Mayor James Knowles III announced Wednesday that the city had reached a mutual separation agreement with Jackson that will pay him one year of his nearly $96,000 annual salary and extend his health coverage. Jackson's resignation becomes effective March 19, at which point Lt. Col. Al Eickhoff will become acting chief while the city searches for a replacement.

Jackson had resisted calls by protesters and some of Missouri's top elected leaders to step down over his handling of Brown's shooting and the weeks of protests that followed. He was widely criticized from the outset for the aggressive police response to protests and his agency's erratic and infrequent releases of key information.

He took nearly a week to publicly identify Wilson as the shooter and then further heightened tension in the community by releasing Wilson's name at the same time as store security video that police said showed Brown stealing a box of cigars and shoving a clerk a short time before his death.

Knowles said Jackson resigned after "a lot of soul-searching" about how the community could heal from the racial unrest stemming from the fatal shooting last summer.

"The chief is the kind of honorable man you don't have to go to," Knowles said. "He comes to you when he knows that this is something we have to seriously discuss."

The acting head of the Justice Department's civil rights division released a statement saying the U.S. government remains committed to reaching a "court-enforceable agreement" to address Ferguson's "unconstitutional practices," regardless of who's in charge of the city.

In addition to Jackson, Ferguson's court clerk was fired last week and two police officers resigned. The judge who oversaw the court system also resigned, and the City Council on Tuesday agreed to a separation agreement with Shaw, the city manager.