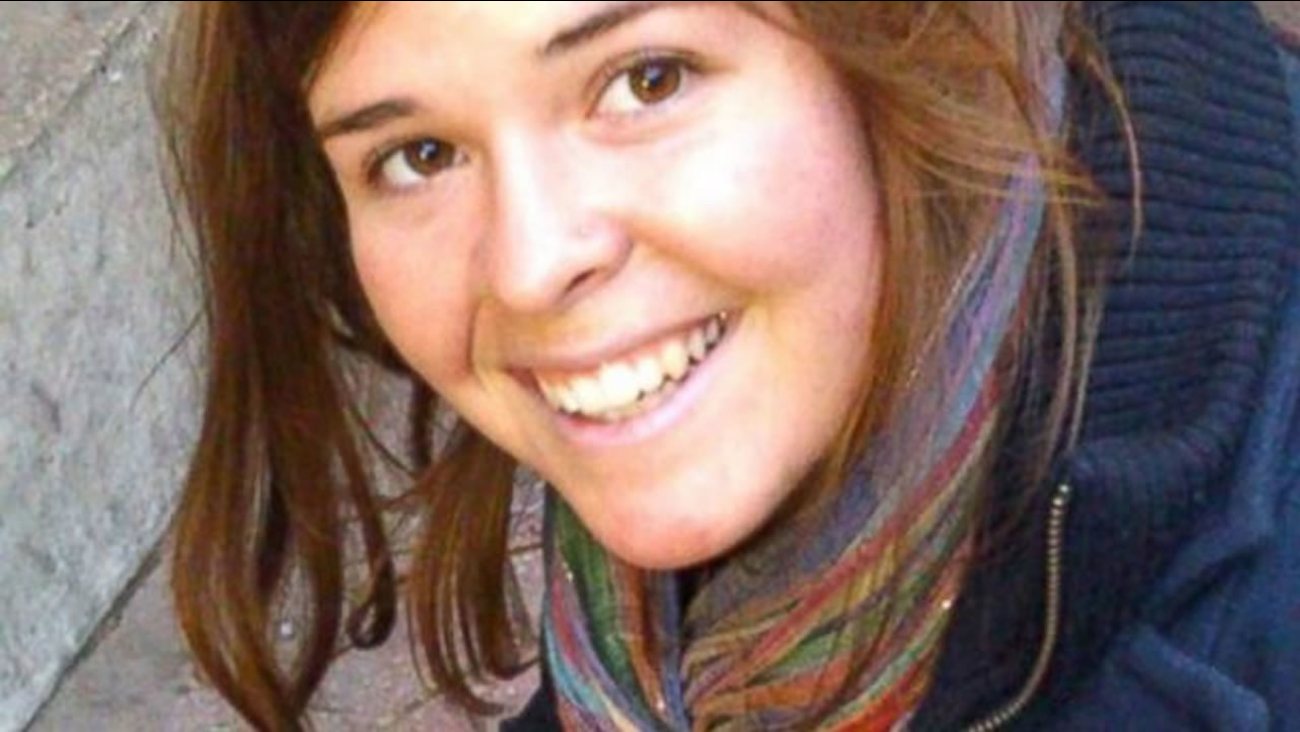 PRESCOTT, AZ -- The father of an international aid worker killed while being held captive by Islamic State militants read a moving letter at his daughter's hometown memorial service Saturday, recounting her discovery that her life's purpose was to ease the suffering of others.

Kayla Mueller's father paused to regain his composure as he read the letter written while his daughter worked an earlier job at an orphanage in India. Mueller's brother rubbed his father's shoulder as he struggled to get through a particular passage.

"This is my life's work," Carl Mueller quoted his daughter as saying. "But my family is my life."

The 26-year-old was captured in August 2013 after leaving a Doctors Without Borders hospital in Aleppo, Syria, and held for 18 months.

An estimated 500 people attended the memorial held in a college auditorium in Prescott, the northern Arizona mountain community where Mueller grew up. Speakers at the ceremony described Mueller as the ultimate Good Samaritan who had a quick wit and an overflowing heart.

Sen. John McCain's voice cracked with emotion as he delivered a short tribute, saying Mueller has touched the lives of people who never actually knew her.

"We can try to give justice to her murderers' other victims and their families," the Arizona senator said. "But even if we succeed, and our retribution is swift and complete, we could not equal the rebuke that Kayla's life gave to the culture of death that robbed her of it."

A slideshow at the ceremony flashed images of happy moments in Mueller's life.

Childhood photos showed her on a camping trip, standing next to a snowman and laughing as a dog sat straight up in a chair at the table during a meal. Other images showed Mueller as an adult, affectionately nudging her face on a horse's neck in one photo and, in another frame, bending down to smell flowers.

Her father and brother, Eric Mueller, thanked the soldiers who risked their lives in a rescue attempt for Mueller. They also tried to bring some levity to the ceremony.

Her father, dressed in a spiffy dark suit and tie, made sure to lift up the legs of his pants to show off the rainbow-pattern socks he found in his daughter's room.

In her hometown, Mueller helped raise awareness of HIV and AIDS and volunteered for the overnight shift at a women's shelter. She protested genocide in Darfur, Sudan, while in college at Northern Arizona University in Flagstaff. She also traveled to the Palestinian territories, Israel, India and France.

Her parents have started a nonprofit organization called "Kayla's Hands" designed to further her humanitarian efforts locally and internationally.

Mueller and her Syrian boyfriend were both taken hostage. He was released, but he returned to Syria to try to free her. Mueller became interested in Syria after her boyfriend told about the struggles of refugees there.

Mueller is the fourth American to die while being held by the Islamic State group. Three others - two journalists and an aid worker - were beheaded.

In each case, their captors demanded huge ransoms, which the United States has refused to pay, saying doing so would only encourage more kidnappings. President Barack Obama has defended that policy, although he has said it was extremely difficult to explain it to victims' families.