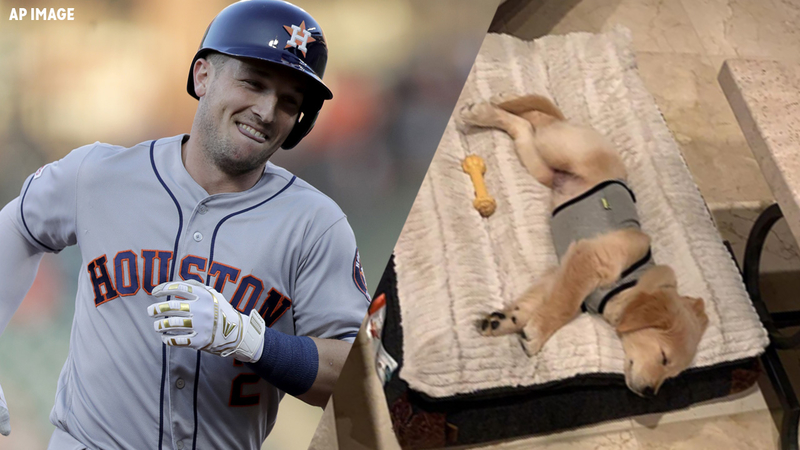 HOUSTON, Texas (KTRK) -- Another Houston Astros star has added a new member to his family, announcing that he's now the proud new dad - of a dog.

Third baseman Alex Bregman shared photos in his Instagram stories of his new puppy, which was also featured in a few photos with girlfriend Reagan Howard.

"Must be exhausting being that cute," she posted about the puppy.

In one photo from Bregman's account, his new four-legged friend is ready to greet him, along with the words "Daddy is home."

In another, the pup, who is named Hank, looks nice and cozy laid out on a bed. Bregman accompanies that snapshot with the words "Night night."

Hank will have plenty of pet peers within the Astros tribe.

Shortstop Carlos Correa and his fiancée Daniella Rodriguez are the proud parents of Rocket and Groot.

Ace Justin Verlander and wife Kate Upton have their own dog named Harley and also help veterans receive service dogs through the ADOPT.RESCUE.HEAL. program, which is part of Verlander's Wins for Warriors Foundation.

And we would be remiss not to mention one of the biggest animal lovers of all on the team, pitcher Lance McCullers Jr. He and his wife Kara are known for supporting numerous animal rescues throughout Houston, including Rescued Pets Movement.

McCullers Jr also has his own project, the Lance McCullers Jr Foundation, which is focused on protecting pets.

He and Kara have their own dogs, Minka and Finnley.

At this rate, there will be enough Astros pets to form their own squad ready to #TakeItBack!