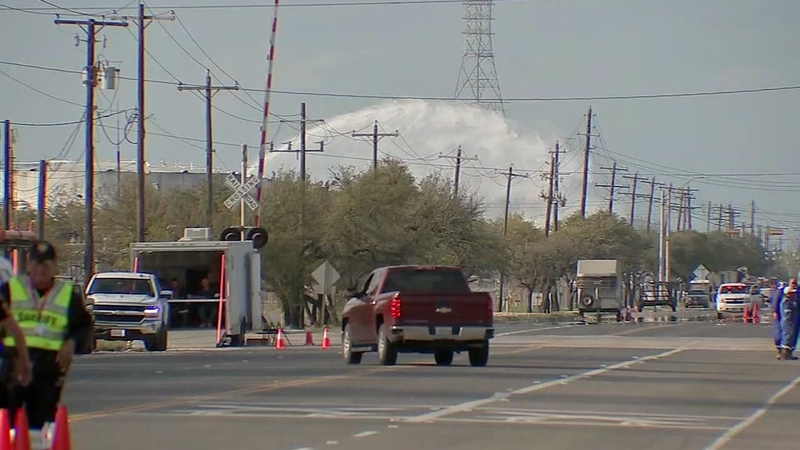 DEER PARK, Texas (KTRK) -- Follow the trail of smoke that started last Sunday and you'd pass through the East End of Houston, where there are a lot of questions.

"I'm afraid of sending my kids to school. We've been told there's some message on the phone that the air is ok. I want to know who came out to test the air and how do I know that they did the tests correctly," said a woman at a town hall meeting at Talento Bilingue de Houston on South Jensen Drive.
RELATED: What school districts are doing to get ready after ITC facility fire

Resident Gloria Rubac said, "I heard a lot of big words that didn't say anything. There were no answers, just a lot of fluff. We need answers."

About twenty miles away, clean-up at the ITC facility is taking place around the clock. Product is being pumped from tanks, even a nearby ditch with a two-foot layer of foam being replenished every hour.

Skimmers have recovered more than 1.3 million gallons of oil-water mixture near Tucker's Bayou and the Houston Ship Channel where portions remain closed, leaving dozens of ships backed up.

The Coast Guard Captain of the Port has opened the San Jacinto River for a period of time to allow vessel traffic through the channel on Sunday between 5 p.m. and 7 p.m., and Monday, between 9 a.m. and noon.

Attorney Benny Agosto collected a plastic bag from a client that contained ash, who says it rained down on their home and cars last week.
"It is catastrophic, I've never seen anything like this. There's been very large explosions and seriously injured folks and even a community affected by natural storms, gases, what we have not seen is the ramification, how far it's going," said Agosto, a partner with Abraham, Watkins, Nichols, Sorrels, Agosto & Aziz law firm.

On Sunday, Congresswoman Sheila Jackson Lee flew with the Coast Guard over the impacted area. She says the damage to the tanks and plant illustrate the intensity of the fire and she could see dispersed substance in the water.

"This is going to take a long, long, long time to really feel comfortable and get the community comfortable that we're at a level of safety and security," said the Congresswoman. She added it will take all hands on deck from the local, state and federal levels.

The residents are taking their notes to the Commissioner's Court and say they are just getting started.

"These companies have polluted everything and they need to be held accountable now," said Rubac.