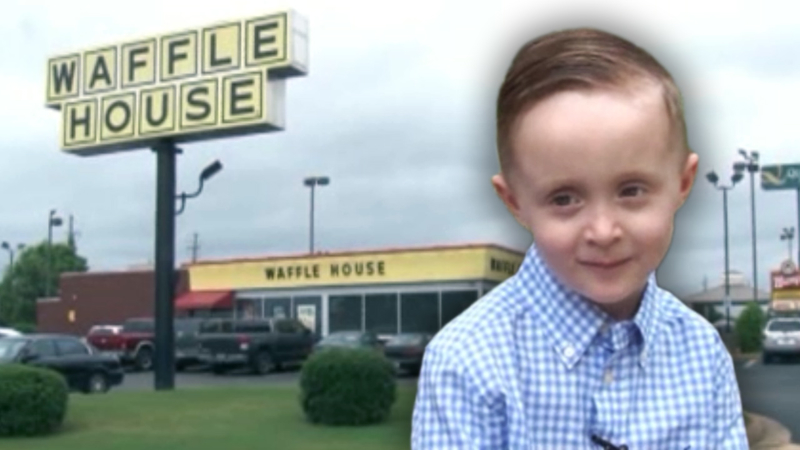 PRATTVILLE, Ala. -- When 5-year-old Josiah Duncan saw a homeless man at a Waffle House, he had a lot of questions for his mom. The most important, though, was how they could help him get something to eat. The exchange that followed brought everyone in the restaurant to tears.

When Josiah first noticed the man, he was curious about his appearance and the bag of a few belongings he was carrying, WSFA reports. His mom, Ava Faulk, listed some of those questions: "Where is his house? Where is his family? Where does he keep his groceries?"

The questions kept getting harder to answer.

"And I said, 'Well, because he's homeless,' and Josiah said, 'Well what does that mean?' And I said, 'That means he doesn't have a house,'" Faulk recalled.

Young Josiah was deep in thought, asking his mom a few more questions about the man. When the man sat down, the little boy sprang into action.

"Nobody really waited on him," his mom explained of the homeless man. "And Josiah jumped up and asked him if he needed a menu because he couldn't order without one."

Before Faulk knew it, the man was dining with them, and she had agreed to pay for his meal. At first he insisted on getting something cheap, she said. Faulk wanted to set an example for her son, so she encouraged him to order what he really wanted.

When the meal came, the little boy had yet another request: to say the blessing. The other patrons listened in as Josiah loudly sang his prayers.

"That man just cried, and everybody else at Waffle House was crying," his mom said.

Faulk says that day her son taught her the importance of seizing the chance to do something good.

"You never know who is an angel on Earth," she said, "and when the opportunity comes at you, you never should walk away from it."
Related topics:
societychildrenreligionparentingbuzzworthyhomelessact of kindnesswatercoolergood newsrestaurant
Copyright © 2021 KTRK-TV. All Rights Reserved.
TOP STORIES
Shocking video shows girl attacked while under CPS care
New homeowner discovers human remains in back yard in Fourth Ward
6 people shot across Houston area in span of 6 hours overnight
Navy Seaman killed at Pearl Harbor to be buried in Texas hometown
Harris County sergeant sexually assaulted by inmate: sheriff's office
Cooling off overnight, even stronger cold front this weekend
Jack in the Box to buy Del Taco for $575M
Show More
Why feds are warning it could take months to get a passport
Petroleum industry's 'Olympics' underway in Houston
50 mutations in omicron could be its downfall, data shows
CEO of American Airlines retiring
Woman tests positive for omicron variant in NW Harris County
More TOP STORIES News