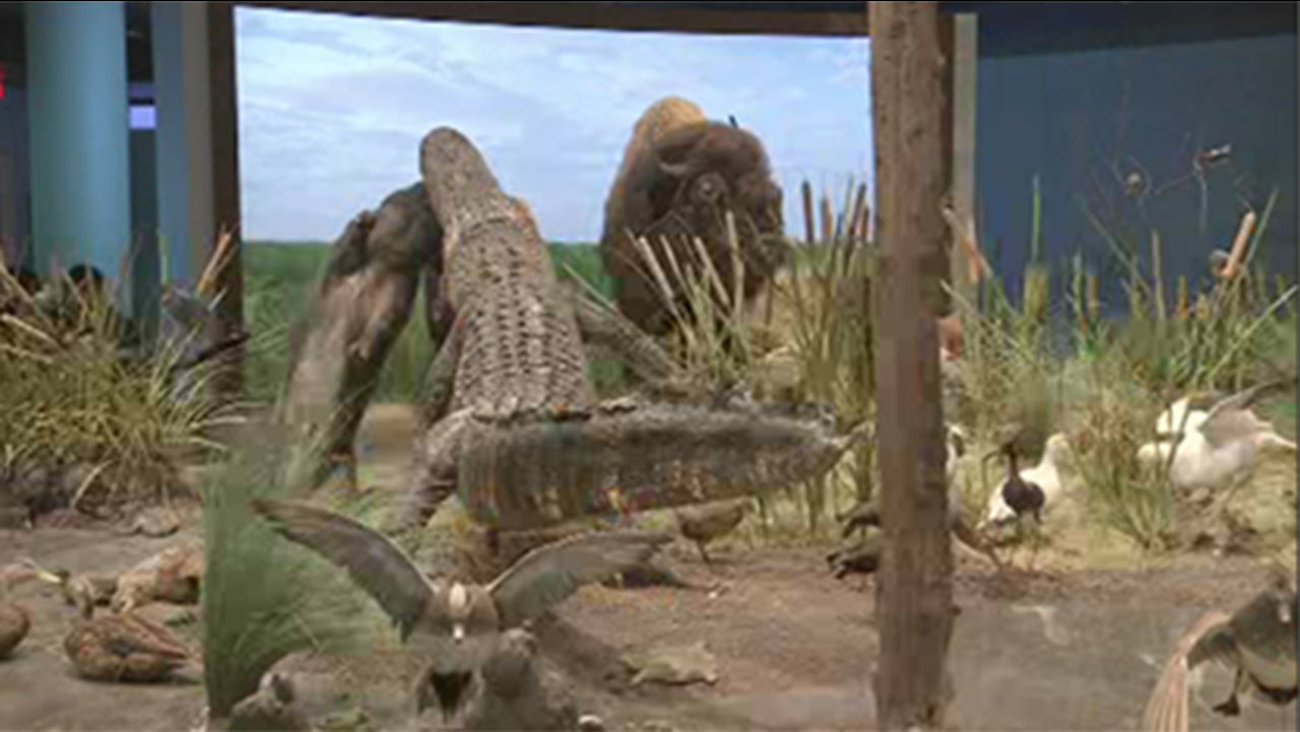 HOUSTON (KTRK) -- Have you ever wanted to reach out towards a roadrunner? Be bold around a bison? Or look an owl in the eyes? At the Houston Museum of Natural Science Farish Hall Exhibit you can watch a woodpecker at work all day, no worries, he won't fly away.

Brooke Martin, a 5th grader from Oyster Creek Elementary in Sugar Land visited the exhibit with her class today.

She says, "It's just a cool experience because they're not alive so you can actually look at them without being scared or anything."

Her teacher Nancy Brocks says it's great to be able to experience all of Texas' native creatures in the same room.

Her student Roman Turner says, "I like to see the animals with no glass and the other exhibits there's a whole bunch of glass and you can't see them that closely."

The exhibit features 250 species, 425 animals, and some of them are difficult to find now. There are others in the display like the passenger pigeon which are completely extinct.

Associate Curator for the Museum David Temple says, "Museums are a really good way to teach. We are bombarded with things all around us every day and to actually learn science and learn thing you really have to look and focus on things." He says one of the hidden gems to find is the Texas state reptile, a horned lizard.

Ms. Brock says the exhibit gets her students even more excited about science class.

She says, "What we focus on is the different habitats here in Texas, as well as the food chain and predators and prey and it's something I teach in my classroom so they are getting to see that here and take it back and apply it back in the classroom."

It's the next best thing to seeing an animal in the wild, but here there are no dangers. Brock's student Delaney Armiger says, "I would like to see a coyote but not get too close to it to where I would like make it mad." Some of the animals move mechanically like the rattlesnake as Arminger adds, "It's just like so cool!" The spotted skunk also moves but thankfully here the "sprayer" is not included!


Information on the all New Farish Hall of Texas Wildlife

The Houston Museum of Natural Science has had Texas Wildlife diorama displays since the early days when the museum was located across the street at the zoo. In 2014 several of the older murals underwent a renovation of supporting habitat and species, and today these vintage treasures can be viewed in the basement of the Education wing.

Today's version of the Farish Hall of Texas Wildlife is located on the 2nd floor, and showcases the remarkably diverse biomes of our beloved Lone Star State. Dioramas highlighting Piney Woods, Oak Motte, Coastal Prairie and Wetland are included as nearby regions, whereas South Texas Dry Forest, Guadalupe Mountains, and High Plains are further afield in other parts of the state. There are also kiosks focusing on extinct and vanishing species, invasive species in our state, and aberrantly colored individual animals.

In total over 425 specimens representing approximately 250 species will be on display. Emphasis for this exhibit is placed on rare, endangered and extinct species. Over 50 species, more than 20 percent of those on display are classified under some level of threat.

One of the most important services a museum provides to its patrons is serving as a monument of history. For this reason, the dioramas emphasize what our state's wildlife looked like prior to extensive human colonization.

Species such as White-tailed deer, Pronghorn, Bald Eagle, Peregrine Falcon, Alligators, and various Egrets and Herons were all but extinct at one point in our state, but today are present in stable numbers. Ocelots, Jaguarundi, Whooping Cranes, and Red-cockaded Woodpecker are still teetering on the brink of extinction in Texas despite populations being more stable today than they used to be. Black Bears, although formerly widespread, remain locally extinct throughout much of the state.

Although zoo-bred Black-footed Ferrets have not yet been reintroduced to our state, it has happened elsewhere and could occur in the future in our Texas. Sadly for others, such as Jaguar, Passenger Pigeon, Ivory-billed Woodpecker and Carolina Parakeet it is too late. Jaguars are totally absent from Texas, unlikely to return here ever, and the Pigeon, Woodpecker and Parakeet are globally extinct - gone forever.

Curator Daniel Brooks, Ph.D. has been curator of vertebrate zoology at HMNS since 1999. When not creating new exhibits, among other capacities, he is coordinating two long-term Texas bird research projects: one dealing with invasive species, and the other with waterfowl community structure. Tour the new hall with Dan and museum master docents.