Which player had the best sneakers of Week 9 in the NBA? 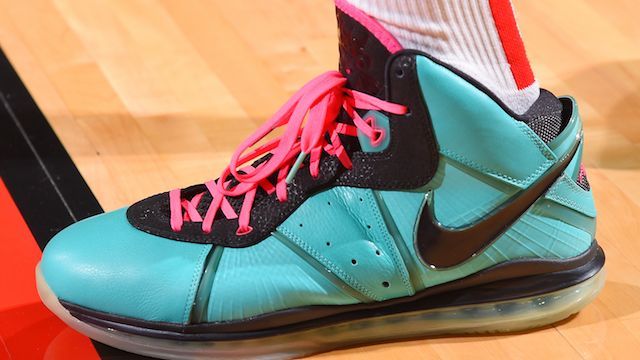 While he's most known for wearing collectible kicks worth as much as $20,000 per pair -- and sometimes even more --Houston Rockets power forward PJ Tucker has been showcasing a love for sneakers that extends far beyond the hype this season.

From obscure, decade-old Kevin Durant models to vintage LeBrons, Tucker has been breaking out more and more of his personal picks this season. While hosting LeBron James and the Los Angeles Lakers earlier this week, he wore one of the most beloved pairs from James' Nike series.

"This shoe, still to this day, is one of my favorite shoes of all time," Tucker said. "The colorway was ridiculous."

The "South Beach" LeBron 8, with its vivid teal leather upper and pink accents throughout, was originally released just after James joined the Miami Heat in 2010. It remains one of the greatest themes from his signature series over the course of his 16-year career.

The Golden State Warriors star's latest Under Armour sneaker features a sleek, flowing design that honors the franchise's final season in Oakland. The arch incorporates a graphic from the ceiling architecture of Oracle Arena, among other details throughout.

"Being in the signature shoe game, it's a competitive business," Curry said. "We're always trying to push the envelope with every rendition that we come out with and continue to push the innovation and push the storytelling."

Highlighted by a "10 In The Town" theme, the model pays tribute to the 10 years Curry has spent in Oakland to start his NBA career, with upcoming colorways of the sneaker taking inspiration from local landmarks and his memories in the region. The debut colorway drafts off of the Fox Theater, a downtown staple venue for concerts and performances, and its vivid tones of orange and neon.

First game out in the #Dame5. This is the Chinese New Year colorway. 5s feel great on court! #KicksOnCourt #CNY #RipCity @adidashoops ///

Elsewhere in the league, new player exclusives were debuted, as Philadelphia 76ers center Joel Embiid wore his first themed edition of the HOVR Havoc since signing with Under Armour in October. The All-Star owns the trademark to "The Process" and layered the phrase along the collar of his size-17 sneakers.

Last but not least, Nick Young is back! While expected to fill in a limited role for the injury-riddled Denver Nuggets and provide some much-needed shooting depth, "Swaggy P" has long been one of the most exciting players to follow for his footwear. In his first game with the franchise, he wore an all-yellow patent-leather edition of the Adidas Pro Model, featuring the phrase "Still Swaggy" along the collar of the early 2000s model.

As Adidas remained cautiously optimistic that the 33-year-old would land on a roster during the first half of the season, he kept the faith all along.

"Can't doubt things when you're Swaggy P," Young said to reporters after his debut.

Check out all of the best sneakers from around the NBA this week, and vote for your favorite pair below in our latest poll. For real-time updates on the feet of the game's biggest stars, be sure to join our ESPN SneakerCenter Facebook Group.
Report a correction or typo
Related topics:
sportsespngolden state warriorsstephen currysneakershouston rocketsdenver nuggetsnbalos angeles lakersbest sneakers of the weekcustom sneakersnick youngkicksnba kickspj tuckerlebron james
Copyright © 2020 ESPN Internet Ventures. All rights reserved.
More Videos
From CNN Newsource affiliates
TOP STORIES

Protesters to Minneapolis officers: 'He begged you for his life'
Gov. Abbott addresses occupancy citations for violators
2 shot, 1 killed near popular Houston restaurant
HFD steps in after 550 complaints on bars
Single mom gives son at-home graduation ceremony in Houston
Show More
List of businesses set to reopen this week in Texas
Church could be evicted for helping feed families in need
DWI numbers rising quickly as Houston reopens
Dog learns to pick up trash during pandemic
Here's when a round of storms could impact us Wednesday
More TOP STORIES News