KTRK
By Marla Carter
HOUSTON, Texas (KTRK) -- A woman wearing a huge dog head with wings costume is now in custody after leading police on a short chase through southeast Houston.

Colleen Dickens, 30, was arrested and charged with robbery and felony evading.

Mug shot of the Day: Deputies had to put a towel over this woman’s mouth because she kept spitting on officers. She was allegedly wearing this dog mascot head when she robbed a gas station this morning. Precinct 7 arrested her after a chase @abc13houston https://t.co/321IIi3cws pic.twitter.com/XALXNFkXw1

Dickens' mother says the incident does not describe who her daughter is.

"She's not a criminal. She's just going through some stuff," Carmella Walker said.

Harris County Precinct 7 deputies said Dickens robbed a Stripes convenience store in the 2330 block of Southmore for cigarettes and $10.

Authorities say after the robbery, Dickens led them on a short chase down Parkwood near Scott Street.

Surveillance video from the end of the chase shows Dickens getting out of her vehicle with the dog head still on.

Officers say she spit on them and turned very combative. Her family says she was having a mental breakdown and is not normally combative.

"She was just getting back to herself. It's just like all of sudden, things started spinning out of control," said Walker.

Dickens' family told Eyewitness News that she has two kids and is working to get her life back together. 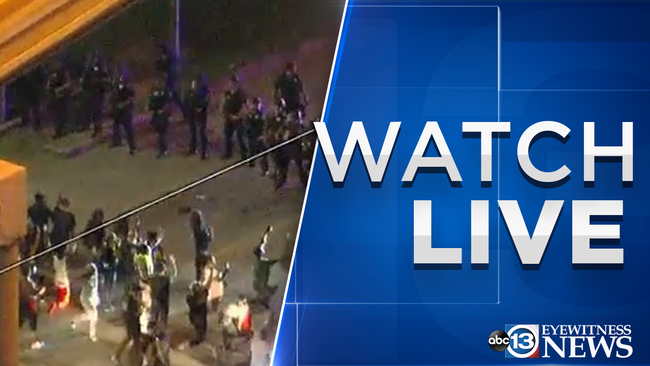