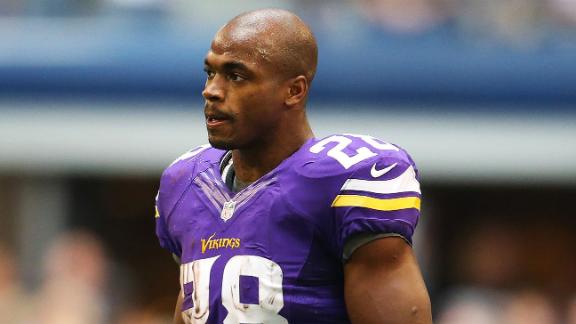 EDEN PRAIRIE, Minn. -- While Adrian Peterson continues to await reinstatement from the NFL and ponder his football future, his coach with the Minnesota Vikings said he would welcome Peterson back.

In the first public comments from a Vikings official about the subject since Peterson was suspended on Nov. 18, Mike Zimmer said he "will be in [Peterson's] corner" if he returns to the Vikings in 2015.

"I think he would add value to any team, to be honest with you. I think the kid's a heck of a football player."

Peterson, who was indicted on Sept. 12 for injuring his son in an act of corporal punishment, was placed on the commissioner's exempt list on Sept. 17 and suspended for the remainder of the season in November. Arbitrator Harold Henderson upheld the suspension on Dec. 12, and the NFL Players Association is suing the league on Peterson's behalf, seeking the running back's immediate reinstatement and arguing that the appointment of Henderson -- a former league executive -- was unfair.

Under the current terms of his suspension, Peterson cannot be considered for reinstatement until April 15.

"Our hands are partly tied with the NFL and the time frame that they give us. But also it's partly up to Adrian and make sure he's doing what he has to do in order to get back reinstated off the suspension," Zimmer said. "So those are all factors that we have to factor in, but we would love to know ASAP just so that we can start going because, a guy like him, your football team and your offense can be different [if] you have him and you don't have him. It's how you want to build the team around him, at least in my opinion, anyway. I haven't talked to [GM] Rick [Spielman] about a lot of these questions that you're asking yet because we just finished the season, but we'll sit down and we'll visit about all of this stuff."

Zimmer pointed out that Peterson touched the ball only 21 times in the Vikings' season-opening win over the St. Louis Ramsafter not playing in the preseason. That should keep Peterson, who will be 30 in March, fresh for next year. But the running back's future in Minnesota could come down to whether he agrees to restructure his deal and make it more cap-friendly for the Vikings.

He is scheduled to make $13 million and count for $15.4 million against the Vikings' salary cap next season. In an interview with ESPN earlier this month, Peterson said he didn't think he should have to take a pay cut next year, saying, "I see me being a better player than I was."

ESPN NFL Insider Adam Schefter reported in November that Vikings chief administrative officer and vice president of legal affairs Kevin Warren had been working with the NFL to keep Peterson off the field in 2014. In his interview with ESPN, however, Peterson said he could feel the support he had from Vikings players and coaches, adding he'd been watching every one of the team's games and envisioning how he could help rookie quarterback Teddy Bridgewater.

"Through this process, I've thought about playing other places, with everything that's been floating around the organization," Peterson said. "But I keep a level mind. The people that are doubting me are people that are, in the big scheme of things, not relevant. I'm able to look at the organization as a whole and see for what it is. There are friends, teammates, people I've been around for years. I think about what I would be leaving behind, but it's a business, as well."

Peterson has praised Zimmer on several occasions, telling ESPN in July that his first conversations with the new coach helped him put aside thoughts of playing elsewhere after the Vikings fired Leslie Frazier. On Tuesday, Zimmer said he thought his relationship with Peterson was a strong one.

"When I first got the job, one of the things that I wanted to make sure I did was to develop a relationship with Adrian to try cultivate him into working with me in this program," Zimmer said. "I felt like over the short period of time that we were together that we had done that. So I really like the kid. I hope what's best for him."