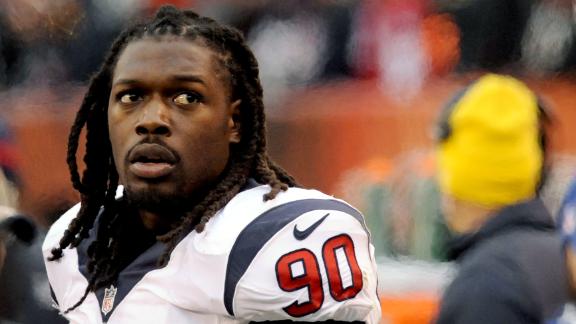 After he met with renowned orthopedic surgeon James Andrews on Wednesday, it was determined that Clowney needed a second surgery on his right knee.

Dr. Walt Lowe, the Texans' team doctor, performed both the scope on Clowney's knee earlier this season and the microfracture surgery.

"He wants to play football. He wants to be good so I think he was disappointed right off the bat. But I think he understands what he has to do and why this is necessary, and he knows that he has to rehab hard and get back out there."

The outside linebacker, the top overall pick in the 2014 draft, had sports hernia surgery in June, shortly after signing his rookie contract. In August, Clowney suffered a concussion during a practice with the Denver Broncos. He was ready for the beginning of the season but tore the meniscus in his right knee in the first half of the Texans' opener. He had arthroscopic knee surgery the next day.

In addition to the lateral meniscus tear, Clowney had articular cartilage damage in his right knee, a source told Ganguli. Because of that, upon having his original arthroscopic knee surgery in September, the Texans knew a further repair was possible but hoped it wouldn't be necessary.

After missing six games, Clowney, 21, tried to return, but his knee never quite felt right.

Clowney played in four games in his rookie season, amassing a season-high 49 snaps against the Cincinnati Bengals in Week 12. Clowney's knee had trouble upon his return to the field, as he experienced pain and swelling during and after games.

Houston will continue relying on Whitney Mercilus to fill in for Clowney on Sunday at Jacksonville. Mercilus, who was the 26th pick in the 2012 draft, has started 10 games this season and has 43 tackles, four sacks and a forced fumble.

Information from ESPN.com Houston Texans reporter Tania Ganguli and The Associated Press contributed to this report.