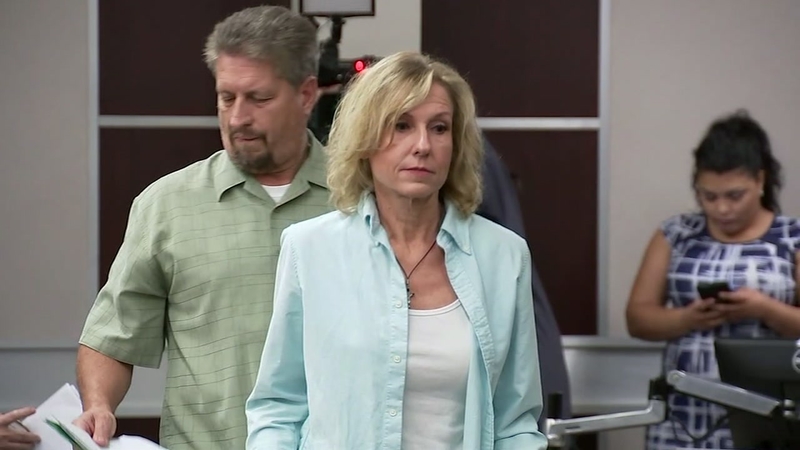 SANTA FE, Texas (KTRK) -- There was friction between the Santa Fe ISD school board and parents in the audience Monday night.

Some of the parents wore shirts with a big "F" on the front, saying that is the grade they give the district's handling of school safety after the May 18 shooting at Santa Fe High School.

The parents claim protecting students hasn't been a priority, going back even before the massacre that claimed the lives of 10 people and injured 13 more.

"My son was a shield for other students to escape that classroom. My son should have never been put in that position, but he did it with his golden heart. That's who Chris is."

Family of Chris Stone has filed a lawsuit against family of Dimitrios Pagourtzis.

A recent school threat has many on edge after the first month of classes. Some parents are upset charges weren't pursued, though, the district says the students are facing discipline.

"If they report the bullying or terroristic threats, that's money taken away from our district, shame on them," said Donna Hayes.

Injured substitute teacher Flo Rice spoke for the first time. Her husband, Scot, and many parents read the names of those who were killed, along with the injured survivors.

The group says they have asked for formal recognition on the board agenda, but says taking the public comment time was the only way they could get it.

As Scot Rice read and reached his allotted time limit, a police officer walked towards him as if he was going to remove him, but was allowed to continue only after backlash from the community.

"My emotions are high. You saw what just happened and they don't want to let us speak. That was the first time the 13 victims' names have been told in public. That was a lot for the families to let us go through, because they've been very private," Scot said.

Some board members thanked the parents for their input and say they are listening, but that wasn't enough for many parents.

"They all need to go, it's time to clean house," Hayes said.

Flo Rice, who was among the 13 injured in the Santa Fe High School shooting, was among the group of victims and survivors who visited with President Donald Trump on Thursday at Ellington Field.