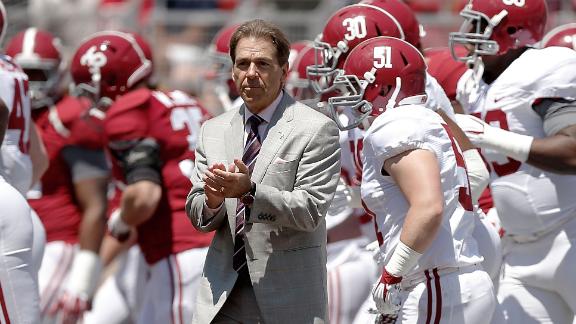 Several Pac-12 coaches took aim at the SEC during their spring teleconference Thursday, criticizing the league's decision to stick with an eight-game conference schedule that they believe could disrupt the equity of the selection process as the sport moves into the College Football Playoff era.

Last week, the SEC voted to maintain an eight-game conference schedule. The Pac-12 and Big 12 already play nine conference games, and the Big Ten is scheduled to start a nine-game slate in 2016. The ACC will hold its spring meetings later this month in Florida, where it could decide to either maintain an eight-game schedule, plus its partnership with Notre Dame, or move to nine games.

"I would like to see everybody operate under the same set of rules or restrictions or regulations or whatever word you want to throw in there," UCLA coach Jim Mora said. "I think the Pac-12 is an incredibly competitive conference. I look at the teams that make up this conference and I think anybody can beat anybody on any given week. I think the same can be said for the SEC. And yet we play nine games against each other. I like that.

"I think we like that as a conference and I think we take pride in that because we're interested in competing against the best week in and week out. We try not to schedule too many patsies."

Most of the Pac-12 coaches were of the opinion that playing only eight conference games gives SEC teams a competitive advantage -- especially because they can schedule a fourth nonconference game later in the season.

"I would hate for one of those teams left standing that didn't go through the same gauntlet as all the other teams have [to be selected for a playoff]," Shaw said.

Some coaches weren't as pointed as Shaw and Mora.

Washington State's Mike Leach -- also in agreement that there should be a level playing field -- was complimentary of the SEC for taking advantage of the situation.

Added Oregon coach Mark Helfrich: "If we're going to call anything equal and everybody pointing in the same direction as far as a playoff, it seems like the qualification for that playoff should be equal. We're a long way from that with a few leagues. We can't do anything about that ...

"I'm not surprised. They do that for a reason. There are a couple of leagues that are in the minority. That's definitely to their advantage. I don't think that part of it was surprising."

Others, like Arizona's Rich Rodriguez and new Washington coach Chris Petersen, said that while they see the competitive advantage, they are more focused on their teams.

"I think it would make it more fair," Rodriguez said. "But I'm not worried about that. Hell, I'm just trying to get a first down right now."

Shaw, who was the most outspoken of the Pac-12 coaches, called the SEC's decision more disappointing than surprising.

"There's no taking away anything that LSU and Alabama and Auburn recently have accomplished," Shaw said. "They've been phenomenal. My take is to say, 'OK, the rest of us are playing our conference. We're playing nine out of 12 teams in our conference. Why can't you do the same thing?'