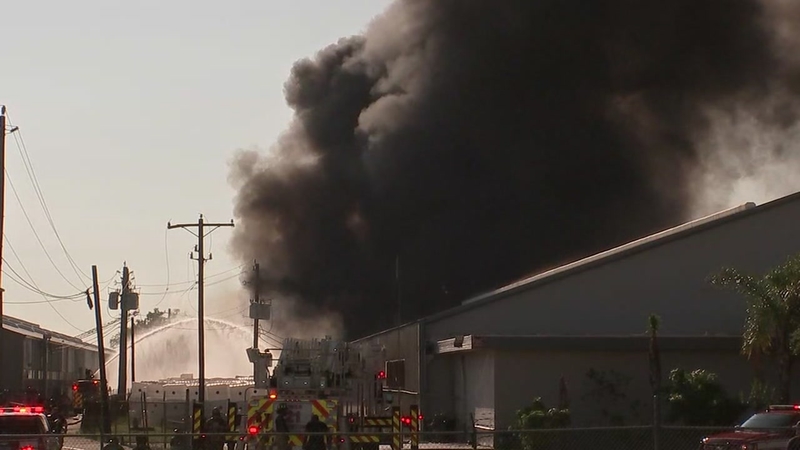 HOUSTON, Texas (KTRK) -- The shelter-in-place has been lifted after a four-alarm fire that sent thick plumes of black smoke into the air on the south side of Houston Monday morning.

Fire crews are on the scene of a warehouse fire at Almeda near Reed in southwest Houston.

Fire units first arrived to the scene shortly after 6:30 a.m. Monday. The Houston Fire Department upgraded it to a second-alarm fire minutes later.

At one point, Houston Transtar cameras showed the thick, black smoke coming from the area.

The company cleans the 250-gallon containers and then sends them back out to businesses. Although the containers come in empty, they may still have a residual amount of chemicals left inside them that authorities say could contain anything from bleach to organic peroxide.

About 200 firefighters worked to put out the flames.

Officials say two firefighters were sent to the hospital while working on the fire. One firefighter was transported for heat exhaustion and the other for chemical exposure. Both are expected to be OK.

150-200 @HoustonFire firefighters remain on the scene of a large warehouse fire off Almeda in SE Houston. Cause unknown at the National Container Group, which cleans out large bulk containers and drums that are used to store chemicals. @abc13houston pic.twitter.com/uFBvt9lEQq

While the fire burned, Meteorologist Travis Herzog says it created a "pyrocumulus" cloud that was visible from miles away.

And the fire is almost OUT!

No word yet on the exact cause of the fire.