Aaron Rodgers tosses 6 TDs in half 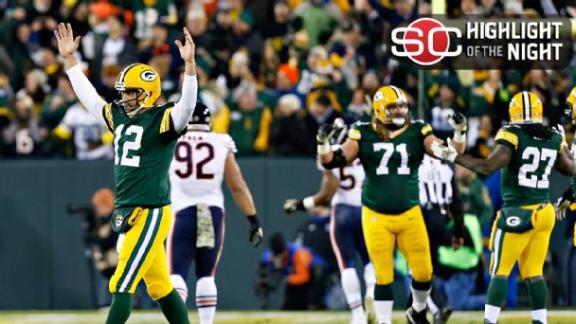 GREEN BAY, Wis. -- No one has ever thrown seven touchdown passes in one half of an NFL game, but Aaron Rodgers' six in the first half of Sunday's 55-14 victory over the Chicago Bears tied the record.

No one had done that since Daryle Lamonica of the Oakland Raiders on Oct. 19, 1969, against the Buffalo Bills.

Rodgers threw two touchdown passes to Jordy Nelsonand one each to Brandon Bostick, Andrew Quarless, Eddie Lacy and Randall Cobb to lead the Green Bay Packers to a 42-0 halftime lead at Lambeau Field.

"We just kind of got things going our way," Rodgers said. "The line did a good job of giving me time to extend plays. If you extend plays, you look down the field and there's Jordy Nelson. He made some nice catches."

Backup Matt Flynn took over with 7:44 left in the third quarter and the Packers leading 45-7.

In one half, Rodgers tied the franchise record for touchdowns in a game. He had a share of that record already along with Flynn. Rodgers previously threw six touchdown passes on Oct. 14, 2012, against the Houston Texans, while Flynn did it in the 2011 regular-season finale against the Detroit Lions.

Rodgers completed 18 of 24 first-half passes for 315 yards and led the Packers to the most points ever allowed by the Bears in a half.

It is the second consecutive outing in which the Bears have set a franchise record for points allowed in a half. They surrendered 38 points in the first half against the New England Patriots on Oct. 26, which broke the previous mark of 34 points allowed, set on Oct. 4, 1958, at Baltimore.

ESPN.com's Michael C. Wright and The Associated Press contributed to this report.

Rodgers Throws 6 TDs In First Half
Highlight Of The Night: Aaron Rodgers tied an NFL record with six touchdown passes in the first half as the Packers demolished the Bears 55-14.