Protester who climbed Statue of Liberty apprehended by police 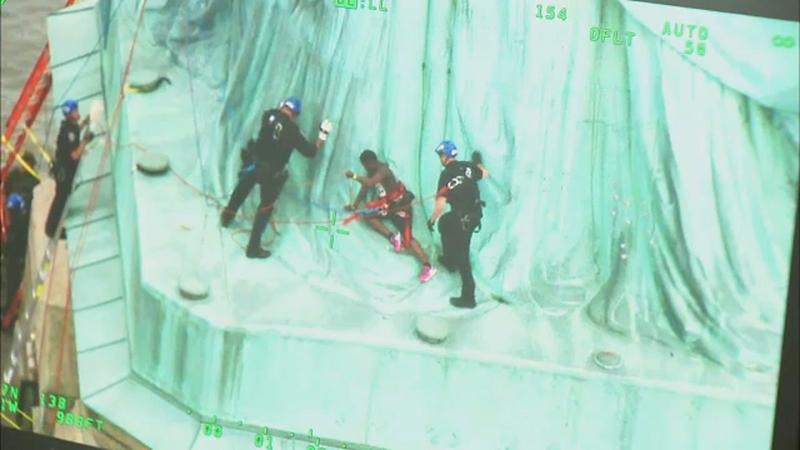 NEW YORK -- A protester who climbed the Statue of Liberty's base has been escorted down by police after a roughly four-hour standoff that forced the evacuation of Liberty Island on the Fourth of July.

After two New York Police Department officers went up to the base and reached her, news helicopter video showed her and the officers moving carefully along the edge of the statue's robes toward a ladder police had set up.

She climbed down about 25 feet to the statue's observation point, with another officer descending ahead of her.

Earlier, several people on the statue's pedestal hung a banner emblazoned with a message about abolishing Immigration and Customs Enforcement and were arrested.

The protester appeared to be moving occasionally and waving a t-shirt at times. At other times she was seen lying on her stomach and kicking her feet up behind her.

"We've had two unusual events occur back-to-back," National Park Service spokesman Jerry Willis told Eyewitness News. "So for the safety and security of our visitors, we decided to evacuate for the day."

"It's our busiest week of the year, historically," Willis continued. "The island at this time of the day is mostly near capacity, at 4,000 to 4,500 people. All boats have been tasked with moving people off the island. We have an evacation plan. Given the heat of the day, the visitors complied with no issues."