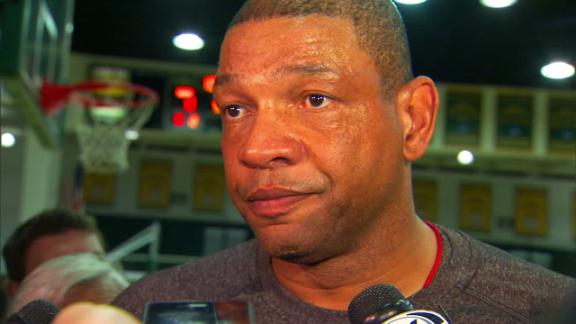 ESPN
By Arash Markazi
SAN FRANCISCO -- Before the Los Angeles Clippers gathered at the University of San Francisco Saturday afternoon for their final practice before Sunday's playoff game against the Golden State Warriors, they gathered as a team at their downtown hotel for a meeting where they discussed the audio recording purportedly of Clippers owner Donald Sterling making racist remarks to his girlfriend.

Coach Doc Rivers led the 45-minute meeting and several players, including Chris Paul and Blake Griffin, spoke and voiced their anger after hearing the nearly 10-minute audio tape, which was released by TMZ on Friday night. The possibility of boycotting Game 4 of their first-round series against the Warriors was raised but quickly dismissed.

"I thought we needed to talk about it because everyone else is and so we needed to talk about it and all things came up," Rivers said. "We've heard all the stuff, the boycotts and all the stuff and all those things are things you could do but we choose to play and we're going to play tomorrow. ... It was brought up because I'm sure 20,000 people have suggested it but honestly I'm completely against that and they were, too.

Rivers spoke on the matter on behalf of his players. Paul and Griffin addressed reporters but refused to answer questions about Sterling or the audio tape. Paul did release a statement on the situation through the NBPA.

"I don't know if I'm surprised or not," Rivers said. "I didn't like the comments, obviously. We had a great team meeting this morning about it. A lot of guys voiced their opinions. None of them were happy about it. This is a situation where we're trying to go after something very important for us. Something that we've all dreamed about all our childhoods. Donald or anyone else had nothing to do with that dream and we're not going to let anything get in the way of those dreams."

Rivers left the Boston Celtics last June after the Clippers agreed to send Boston an unprotected first-round pick in 2015 as compensation for letting Rivers out of the final three years of his contract. Rivers signed a similar three-year, $21 million deal with the Clippers to become the head coach and senior vice president of basketball operations.

When asked how comfortable he was now working for a team owned by Sterling, Rivers said, "I don't know. It doesn't make me comfortable today, for sure. I have a job to do for the players. I have to get them to do their jobs and it's going to be a hard job and I get that. They're going to get hit all night. This is a distraction and my job is to try to lead them the best way that I know how.

"The best way I know is to get them together and unite them together to play well. It is a distraction, there's no question about that."

While the players did not address the matter publicly, Rivers said the team was united in their displeasure and anger about what they heard in the recording.

"They're young men," Rivers said. "It shouldn't be African American men. We have two white guys. It's about being human. We're not going to get into what race we are because we represent each other and this is our team and that's the way we're going to keep it. No one was happy about it. J.J. Redick was just as pissed as Chris Paul and that's the way it should be.

Rivers said he had not talked to Sterling and didn't plan on talking to him before Sunday's game.

"We have not and we have not tried honestly," Rivers said. "This is something that Donald and his family and everyone else has to figure that part out. We don't need a talk. We don't need that. ... Not right now. I want to deal with my team. This is a distraction and for me, I'm going focus on my guys. I came here for them and they came here because of each other. Our goals have not changed. It's like one of the players said today, 'When I was a little kid and I had a goal to win a world championship, it was to do that. It wasn't to win a world championship for someone.' That's our thoughts."

Rivers, like most of the team, was made aware of the audio tape late Friday night and heard it before Saturday morning's meeting.

"I heard it all," Rivers said. "I wasn't happy. I don't like racism. It's something I don't want to deal with but it is real life stuff that comes into play and this is one of them and we're going to deal with it as a group together and that's all we can do."

Rivers continually stressed the importance of his players focusing on the game at hand and not getting distracted but understood that would be easier said than done before Sunday's game.

"It upsets all of us," Rivers said. "There's not one guy that's happy with this situation. Do you think I want to be talking about this instead of trying to stop Steph Curry? I don't. I don't like all the phone calls I've been getting and all that stuff. We try to keep clutter away from our team and it's been brought to our team and it upsets me and it upsets our team. Having said that, we have something that we're playing for right now and we're going to deal with that and the other stuff, we'll deal with later."

The team discussed various possibilities and options available to them during the meeting but Rivers said their goal of winning a championship as a team was still their top priority and they would deal with off-the-court issues after the season.

"It's disturbing," Rivers said. "It's disturbing if you hear it from anyone. It doesn't matter if he works with us or for us. It's a disturbing comment but we have to be above it right now. There will be a time and a place for us to have a reaction but this is not the time or the place.

"We're trying to win a title and we're not going to allow something to get in the way. The league is going to handle this. The player's association will handle this as well. The biggest statement we can make as men, not as black men, but as men, is to stick together and show how strong we are as a group, not splinter, not walk. It's easy to protest. The protest will be in our play."

Should Sterling Be Suspended?
The "NBA Countdown" crew reacts to the racist comments reportedly made by Clippers owner Donald Sterling and discuss what it thinks the NBA should do with him.

Sterling Under Investigation For Remarks
Chris Broussard reacts to news that the NBA is investigating Clippers owner Donald Sterling for purported racist comments.

NBA's Reaction To Donald Sterling News
Stephen A. Smith comments on how the NBA and its players are reacting to the news of Donald Sterling's purported racist comments.