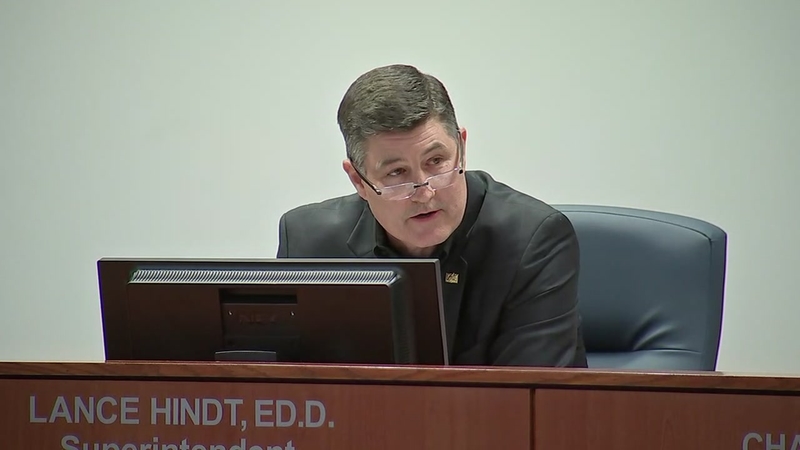 HOUSTON, Texas (KTRK) -- Katy ISD's school board approved a contract amendment with superintendent Lance Hindt that would pay the leader a "separation payment" of at least $750,000.

Hindt announced he'd leave the district Jan. 1, 2019 at Thursday night's board meeting. The contract states the board was terminating his contract.

The contract amendment, voted on and approved 7-0 by the Katy board, wasn't released to the public until 4 p.m. Friday.

The superintendent was the fourth highest paid top official, according to TEA data.

Hindt was saddled with allegations of plagiarism and bullying that led to his eventual dismissal.

Board members also voted to engage with a law firm to sue unnamed individuals for defamation.

Pursuing that lawsuit may not be as easy as going to the courthouse, though.

The lawyer hired to pursue the case, David Feldman, has a history of threatening lawsuits on behalf of school boards. An article from the Galveston Daily News in 2007 described a case against an online blogger and referenced a similar case against Alvin ISD parents in the 1980's. Feldman never filed a suit in the Galveston case, he told ABC13. The Alvin case ended with a retraction at the time.

But to be successful in a case like the one proposed in Katy, Feldman will have to convince a judge this isn't a lawsuit designed to stifle someone else's free speech. Texas law allows critics to get cases dismissed quickly using what's called an "anti-SLAPP" law. SLAPP stands for strategic lawsuit against public participation. It's designed to stop boards, agencies or public officials from using the court system to go after a critic, burying them with legal fees, paperwork and hassle, many times knowing, in the end, they won't win the lawsuit.

Winning a case may not be the ultimate prize, if, in this case, Katy ISD can force the critic to spend thousands to defend himself, it may keep the next critic from ever speaking up.

If the critic can prove he's being sued because he exercised his first amendment rights, the district would almost immediately have to prove their case with "clear and specific evidence" of defamation.

If they can't a judge can throw it out of court quickly, and Katy would have to pay the critic's legal fees. That would be taxpayer dollars, of course.

One expert told us the cost could be upwards of tens of thousands of dollars.