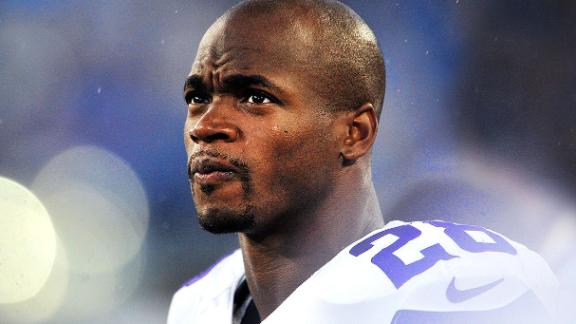 MINNEAPOLIS -- Authorities in Minnesota filed a petition Friday seeking a protective order for the 4-year-old son of Vikings running back Adrian Peterson.

In the petition, Hennepin County Human Services asked a judge to block Peterson from using corporal punishment or physical discipline on the boy. It also would block unauthorized or unsupervised contact, and require Peterson to complete a parenting assessment.

Peterson faces a child abuse charge in Texas for using a wooden switch to spank the boy in May. He has said he meant only to discipline the boy and not hurt him. The order says Peterson told investigators in Texas that he also used a belt to spank his son.

Peterson has been dropped from the Vikings' active roster while the criminal case against him is pending in Texas, where he has an Oct. 8 arraignment.

"This petition reflects that a conscientious government agency wants to work with the parent to protect a child and to ensure that alternative methods of discipline are adopted," Rusty Hardin, Peterson's attorney, said in a statement.

"Adrian is very willing to continue cooperating with authorities in every way in order for them to conclude he is a good parent. The facts stated in the petition have been known to investigators from the beginning. They will be carefully considered in a courtroom by a judge and jury. We look forward to that day."

According to the petition:

The child visited Peterson in Montgomery County, Texas, from about May 6-22. His mother reported possible abuse to Hennepin County Child Protection services on May 22. Separate exams by a doctor May 22 and a nurse practitioner May 23 documented injuries "clinically diagnostic of child physical abuse."

A follow-up exam May 29 found the boy still had traces of the injuries "10 days after the last known time he was physically abused."

"His injuries are significant and may cause some scarring," a summary of the exam said.

The petition also described Peterson's interviews with Texas child protection investigators, including: "Respondent Peterson admitted that Child No. 1 received two spankings as a form of physical discipline, one with a belt and one with a switch."

Hennepin County juvenile court staff attorney Maggie Skelton said prosecutors have asked that the order be suspended until the Texas case is resolved. County Attorney Mike Freeman said in a statement that the petition was required by law once criminal charges were filed.

The filing of the petition was first reported by the Minneapolis Star Tribune.