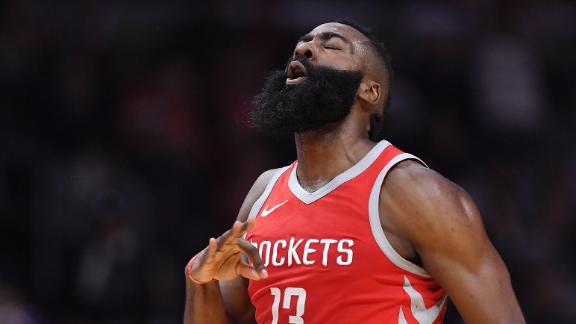 LOS ANGELES -- LA Clippers coach Doc Rivers joked in his pregame news conference Wednesday that he had no concerns about a repeat of last month's incident between the Clippers and Houston Rockets at Staples Center ahead of their rematch because the Clippers were "going to build a wall."

Following a contentious 113-102 Clippers victory on Jan. 15, several Rockets players made their way through a back corridor in the arena's bowels into the Clippers' locker room where they were confronted by security and team officials. The Rockets players, led by Trevor Ariza, reportedly wanted to confront Blake Griffin, who now plays for the Detroit Pistons, and Austin Rivers, who had exchanges with Rockets players and coaches during the game.

Following an investigation by the league office, the NBA suspended Ariza and teammate Gerald Green for two games.

Rivers downplayed a potential repeat to that incident in Wednesday's matchup, which the Rockets won 105-92.

"You know, we've kind of barricaded all of the secret passageways," Rivers said tongue-in-cheek, "And so, I don't think ... listen, I haven't heard one guy talk about it, to be honest. They're a team we want to beat. They're, right now, they and Golden State in the West are the best two teams, probably the best two teams in basketball. They just so happen to be in the West. I honestly don't think we are on their radar that much, except for, they want to beat us. We've beat them twice. Other than that, not much."

Rivers continued with more political humor, adding, "I was joking. But I'll be serious about it: I'm going to stay away from the barricades. We're going to build a wall, and I'm not paying for it! Houston's paying for it!" -- a riff on President Donald Trump's claims that Mexico would pay for a wall along the southern U.S. border.

For his part, Rockets coach Mike D'Antoni brushed aside any suggestion the Jan. 15 confrontation would have any bearing on Wednesday's game.

"Nah, nah. It should be very competitive, but [we're] not making a big deal about it," D'Antoni said.

The humor carried over after Wednesday's game, with Rockets equipment manager Tony Nila creating a "barricade" by lining the door inside the visitor's locker room with caution tape.