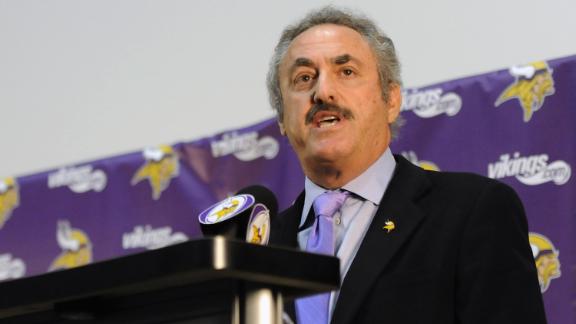 EDEN PRAIRIE, Minn. -- Admitting they "made a mistake," the Minnesota Vikings changed course Wednesday as running back Adrian Peterson was placed on the NFL's exempt list, barring him from all team activities until his child abuse case is resolved.

"We made a mistake, and we need to get this right," Vikings owner Zygi Wilf said Wednesday. "It is important to always listen to our fans, the community and our sponsors."

The Vikings asked for and received the exemption from NFL commissioner Roger Goodell -- which was announced at 1:47 a.m. ET Wednesday -- after initiating contact with the league, which informed the team that the exemption was an option.

The exemption will allow Peterson to remain under the Vikings' control and earn his regular salary while he is away from the team until his legal situation is resolved. Vikings GM Rick Spielman said Peterson will not count against the 53-man roster.

"This was a decision made by the Vikings, by our ownership, and we went to the league to say, 'This is what we want to do,'" Vikings vice president of legal affairs Kevin Warren said. "And then we came up with the best mechanism to accomplish that."

Peterson was indicted last week in Montgomery County, Texas, on a felony count of reckless or negligent injury to a child. The charge stems from a whipping incident that left bruises and wounds on much of his 4-year-old son.

Peterson's next scheduled court date is Oct. 8. Montgomery County first assistant district attorney Phil Grant said a trial could be nine to 12 months away, subject to a judge's discretion. That could mean Peterson will spend the rest of the season on the exempt list, unless he pleads guilty sooner than that.

"Adrian wants to continue his work in the NFL and contribute to his team and community," Peterson's attorney, Rusty Hardin, said in a statement. "In order to do so, he is prepared to resolve this matter in the appropriate legal forum rather than the court of public opinion. I have spent my entire career asking people to wait until all the facts are in, and I'm doing so again today. Ultimately, it will be up to a judge and jury to decide this case, which is the way it should be. Ours is the greatest legal system in the world, and Adrian is confident that a just result will emerge once all the facts are presented."

The exemption granted by Goodell is the same one given to the Philadelphia Eagles while Michael Vick finished serving his jail sentence and suspension for his participation in an illegal dogfighting ring.

Linebacker Jonathan Vilma also appeared on the list in 2012 in connection with the New Orleans Saints' bounty scandal.

Vikings president Mark Wilf said the decision was "absolutely not" triggered by pressure from corporate sponsors.

"We hear their input, but in the end, we as ownership, we as a franchise, we have to make sure the team was moving in the right direction, and in the end we felt this was the right decision," he said. "So we made a mistake, and we're doing the right thing."

Grant said he had not talked with Peterson's attorney, Rusty Hardin, about a possible plea deal, but said he imagined the two would discuss the possibility once Hardin returns from a trip to Europe.

Spielman would not address the possibility that the running back has played his last game for the Vikings, although that question figures to linger for some time. The 2012 NFL MVP will turn 30 in March and is scheduled to make $13 million next season. None of that money is guaranteed, however, and the Vikings would have to count only $2.4 million -- from Peterson's signing bonus -- against their 2015 salary cap if they were to release him.

The Vikings did not consider releasing Peterson this season, however.

"Everyone's asked, 'Would you have cut him?'" Spielman said. "We felt after we reviewed everything, this was the best possible solution."

The Radisson hotel chain, the first sponsor to back away from its involvement with the Vikings and the NFL, emphasized it would continue to suspend sponsorship of the team, despite Wednesday's announcement.

Meanwhile, Indra Nooyi, CEO of PepsiCo, which has a $100 million annual contract with the NFL, said in a statement that "it is increasingly apparent that the NFL is starting to treat these issues with the seriousness they deserve."

"I am a mother, a wife, and a passionate football fan. I am deeply disturbed that the repugnant behavior of a few players and the NFL's acknowledged mishandling of these issues, is casting a cloud over the integrity of the league and the reputations of the majority of players who've dedicated their lives to a career they love. When it comes to child abuse and domestic violence, there is no middle ground," she said.

"The reality for Commissioner Goodell and the NFL is that they now have an opportunity to affect positive change with the situation presented to them. I urge them to seize this moment. How they handle these cases going forward can help shape how we, as a nation, as a society, and as individuals treat domestic violence and child abuse."

Peterson's agent, Ben Dogra, told The Associated Press that "this is the best possible outcome given the circumstances."

"Adrian understands the gravity of the situation, and this enables him to take care of his personal situation," Dogra said. "We fully support Adrian, and he looks forward to watching his teammates and coaches being successful during his absence."

"Adrian Peterson made a decision to take a voluntary leave with pay to take care of his personal and legal issues," the statement read. "The NFLPA and NFL worked with Adrian and the Minnesota Vikings to resolve this unique situation. We support this decision and hope the best for him and his family."

Both Spielman and coach Mike Zimmer said they talked with Peterson in the process of making the decision, though neither would divulge the specifics of the conversations.

"Adrian is an unselfish person," Spielman said. "[With] all of the lights that were coming on this, he felt from his side as well that by him stepping back it would give our football team an opportunity to focus on football."

One teammate, however, was not happy with the move.

Cornerback Captain Munnerlyn said he didn't think the decision was fair, adding his mother disciplined him the same way and that he didn't see anything wrong with what Peterson did.

"With crimes and stuff, you're innocent until you're convicted guilty and I don't think he's guilty of nothing yet. I think he should be able to play football. I really don't get it. At the end of the day I know they came up with the decision, but I really don't get it. I'm just going to stick to playing football and do what I know."

Peterson is the Vikings' all-time leading rusher, having reached the 10,000-yard plateau faster than all but two running backs in NFL history. His 2,097-yard season in 2012 is the second-best in league history, and he made six Pro Bowls in his first seven seasons with the team.

The Vikings used running back Matt Asiata in Peterson's absence Sunday. He caught a 25-yard touchdown pass from Matt Cassel on the Vikings' opening drive but had just 36 yards on 13 carries after that, as the Vikings were forced to abandon their running game in a 30-7 loss to the New England Patriots.

Rookie running back Jerick McKinnon is also likely to see an increased role.

Vikings Brass On Peterson Situation
Vikings owners Zygi and Mark Wilf discuss their decision to put Adrian Peterson on the exempt list, barring him from all team activities until his child abuse case is resolved.

Why Was Peterson Placed On Exempt List?
Ed Werder breaks down the reasoning for placing Adrian Peterson on the exempt list.

Herm: NFL Botched It From The Beginning
Herm Edwards and Brian Dawkins react to the Vikings placing RB Adrian Peterson on the exempt list.

Many Parties Involved In Peterson Decision
Andrew Brandt reacts to the news that the Vikings placed RB Adrian Peterson on the exempt list.