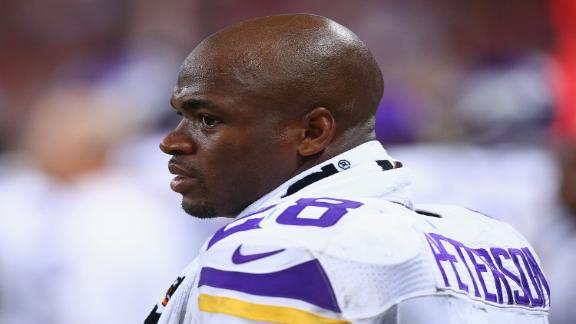 Adrian Peterson's charitable foundation was placed on "hiatus," its website cleared and Facebook page deactivated on Tuesday after some charities it supports received questions about being affiliated with the Minnesota Vikings running back who faces felony charges for child abuse.

The website and Facebook page for Peterson's All Day Foundation were deactivated to protect the charities affiliated with Peterson and prevent them from being harassed, Bruce Richman, Peterson's philanthropy adviser, told "Outside the Lines."

Special Olympics Minnesota, which announced a partnership with Peterson a few weeks ago, acknowledged that it has pulled away from the NFL star.

"On Tuesday, Sept. 9 we announced Adrian Peterson as an Ambassador for Unified Sports," said Lynn Shelander, director of marketing and communications for Special Olympics Minnesota. "However, in light of the information that has come out since then, we are abstaining from any engagement with Adrian Peterson at this time."

Peterson was indicted on one count of reckless or negligent injury to a child Friday, stemming from an incident this year in which he used a so-called switch to discipline his son. The Vikings announced on Monday that Peterson will be allowed to play while his case is being decided.

Richman said charities should be focused on their work and not have to spend time making statements to address their relationships with Peterson.

"When there's positive news and Adrian was doing wonderful things, the media didn't pay attention to Adrian's charitable partners," he said. "Now they're being placed in uncomfortable positions. It's more important right now to protect the charities from the media barrage that takes away from their good work."

Richman said the foundation also has postponed events and a special fundraising campaign. He said it's unclear what Peterson's future involvement will be with a girls AAU basketball team he supports.

Richman at one point Tuesday afternoon posted a message on the foundation's website that stated "Adrian Peterson's All Day Foundation is on a hiatus as of September 16, 2014. The Foundation will re-engage after Adrian, his family, and staff have reflected on how the current situation impacts the direction for Adrian's philanthropy."

But he told "Outside the Lines" later that the foundation remained active and that the website and Facebook pages were cleared solely to help the charities.

This year, the All Day Foundation became part of Minnesota Philanthropy Partners, an umbrella organization that manages the finances for several charities. Prior, and since its founding in 2008, it had been a stand-alone 501c3 organization. Richman said he became involved in 2011 after Peterson's financial adviser "recognized a problem with the foundation's financial management and which organizations were receiving funds."

"Outside the Lines" examined IRS forms for Peterson's charity for the years 2008 through 2011 and found discrepancies between the All Day Foundation's stated mission of helping at-risk children and where much of its grants landed.

The man listed as the president and co-founder of that ministry is named Bill Horn, who was on the Peterson foundation's board and also, at one point, served as its treasurer.

In the late 1990s, Horn, a former sports broadcaster in California, ran an organization by the same name that publicly denounced the gay community. He also produced a graphic video titled "The Gay Agenda," which questioned the notion of homosexuality, and recruitedGreen Bay Packersdefensive end Reggie White to campaign against gay rights in Iowa.

Years later, Horn moved to Oklahoma, where he befriended former Sooners defensive tackle Tommie Harris and started a sports marketing company. Before long,he was in control of Peterson's charity.

When contacted Tuesday, Horn told "Outside the Lines" that Straight From the Heart was just one name for an offshoot of a church in Rancho Mirage, Calif. Churches are not required to make their finances public, so it's not clear how they spend money. Horn, despite being listed in various government filings and directories as the Straight From The Heart president, said he was never on the board, but that he was "involved."

"We don't know everything it did," said Horn, who noted the ministry did business in Texas, Minneapolis and Chicago. "It was doing inner-city outreach and feeding people, giving haircuts to kids, did back-to-school programs, did turkeys at Thanksgiving," he said.

Horn acknowledged the ministry's mission was originally to oppose gay rights, but it "changed and decided not to do that and to help people."

Horn said he did not see a conflict in directing funds to the ministry while serving as treasurer of Peterson's foundation.

Richman said Peterson had no knowledge of the money given to Straight From The Heart Ministries and was not involved in managing the foundation then.

Richman provided "Outside the Lines" a copy of the foundation's 2011 IRS form, which has been filed with the IRS and which he said will be the last to show any donations to Straight From The Heart Ministries. He said the 2012 form will be filed soon. He said he chose to move the foundation this summer under the management of Minnesota Philanthropy Partners to save on administrative costs and to be more efficient.

Richman said he's been working since 2011 to clean up the foundation, get Peterson more involved in the decision-making and broaden its reach to more charities. He provided a spreadsheet that showed the grants the All Day Foundation gave in 2012 and 2013 that totaled $423,500, which includes the $125,000 installment on Peterson's personal $500,000 pledge to the University of Oklahoma. The charity also has pledged $500,000, though none of that money has been raised.

The school has already named its team meeting room, located inside its stadium, after Peterson.