3 women shot in fight with at least 40 people in NE Harris Co. 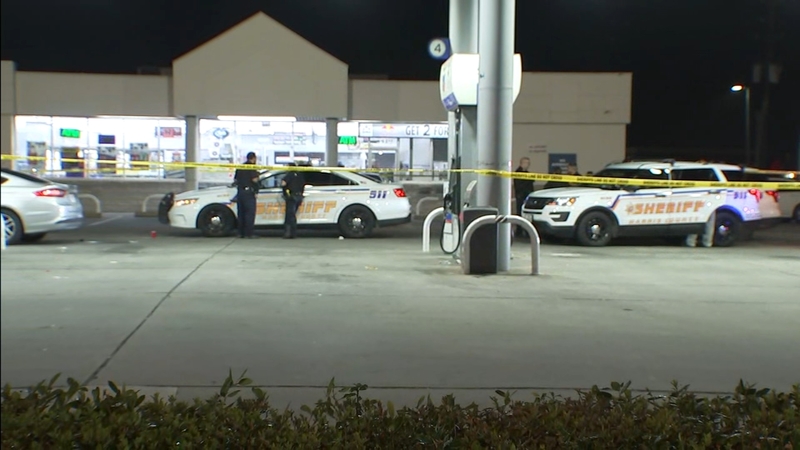 HOUSTON, Texas (KTRK) -- Three women were shot during a fight in the parking lot of a strip center in northeast Harris County, deputies say.

Around 3:12 a.m. Tuesday, the Harris County Sheriff's Office says deputies were called to a Chevron gas station in the 15000 block of the Eastex Freeway to check out a report of vandalism.

While deputies were investigating, four women inside a silver car pulled up and screamed they'd been shot.

It turned out three of them were shot during a large fight down the road in front of the strip center around the 5000 block of Aldine Bender near Lee Road.

It's believed at least 40 to 60 people were involved in the fight.

The women, who are in their late teens to early 20s, were taken to the hospital.

The surveillance video above shows the chaotic moments when the victims' car pulls up to the gas station.

Kayce Guerrero, 18, said she was not involved in the fight, but was driving by it, when she heard gun shots. She followed the victims' car as it pulled into the gas station.

"I was panicking, scared," Guerrero, who knows the women, said. "Got out of the car to comfort her. Police just told me to keep her calm, pray for her, talk to her, because she was passing out."

The 3 women were in this silver car. Shooter was outside. Women’s stories are “all conflicting.” Deputies still trying to figure out what really happened. One woman in car was not hit. #abc13 #breaking pic.twitter.com/bthCOt17WH

Authorities say they were told conflicting stories at first, but have since found more witnesses.

Investigators told ABC13 they expect to find the shooter because everyone they spoke to knows who he is.

It's not clear what started the fight.

Entire Chevron station is taped off. Silver car bar bullet holes, driver’s side window shattered. Will let you know as soon as we get update from @HCSOTexas. #abc13 #breaking pic.twitter.com/ed7U5uuNMK

This is the second shooting in the area within just a few days.

In a separate incident Friday night, an 11-year-old boy was hurt by flying glass when he and his family were caught in the middle of gunfire as his father drove on the Eastex Freeway feeder road near Lee Road. No one else in the boy's family was seriously hurt.