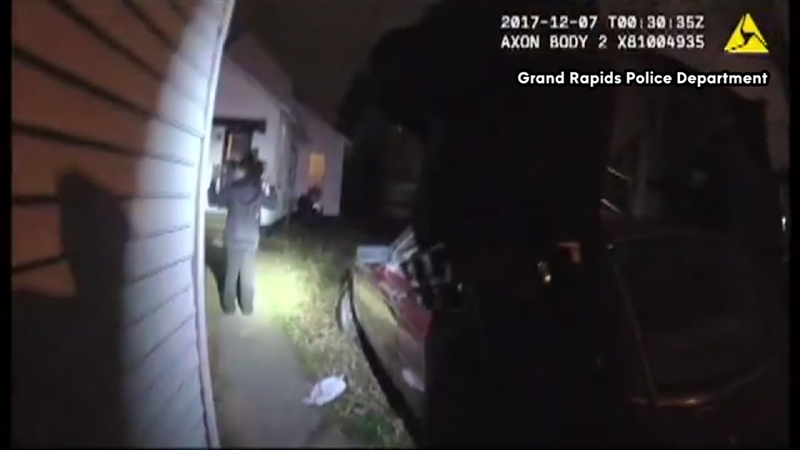 GRAND RAPIDS, Michigan -- A Michigan police department has opened an internal investigation after officers held an 11-year-old girl at gunpoint, handcuffed her and put her in the back of a cruiser.

The incident happened Wednesday as the girl was leaving her Grand Rapids home to go to a store, WOOD-TV reported . Police said officers were at the home looking for the girl's 40-year-old aunt, who was suspected of stabbing a relative nearby, but didn't find her.

Grand Rapids police detained the girl and two other women, including the girl's mother, as they exited the house. The girl's mother said officers ordered her daughter to come down from the porch with her hands up.

"The whole time they are telling her to come down, I'm telling them, 'She's 11 years old. That's my daughter. Don't cuff her,'" Whitney Hodges said.

Her daughter said the incident left her scared.

"It made me feel scared and it made me feel like I did something wrong," the girl told the television station. "I'm afraid to open or go near my back door because of what happened."

Grand Rapids Police Chief David Rahinsky said Tuesday that his officers should have exercised discretion, rather than handcuffing the girl. He said police body-camera footage of the girl screaming as she's being taken into custody are "disturbing" and show the need for policing changes.

Police also issued a statement Monday saying they detained the women and the girl because officers hadn't determined if they were suspects. Police said the women weren't armed.

"The 11-year-old was handcuffed for a total of 2 minutes while she was brought back into the alley and patted down to make sure that she did not have anything dangerous on her," Grand Rapids Police Department spokeswoman Cathy Williams said.

The girl was then placed in the police cruiser for about 10 minutes. She was later allowed to stand in the alley with her other siblings, Williams said.

Officers got permission to search the house and didn't locate the suspect. The women and girl were then released, police said.

An internal investigation was launched the day after the incident following a complaint from the girl's family.