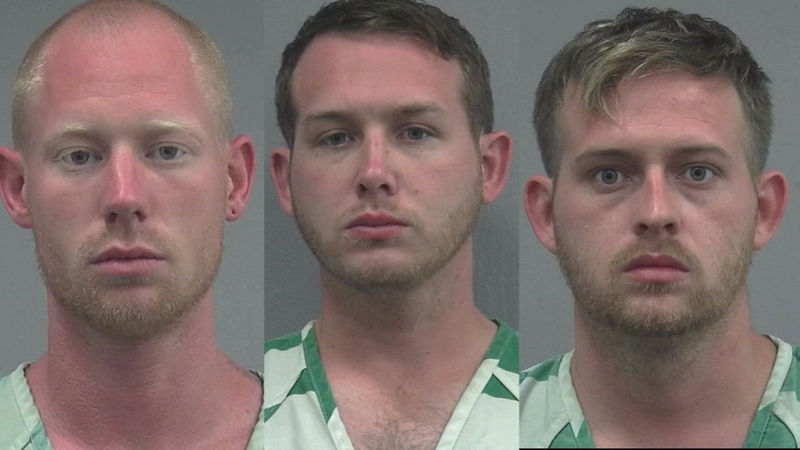 Police say Tenbrink fired a single shot, police said, missing the group and striking a nearby building. He is also being charged as a felon in possession of a firearm, police said.

Hours before the shooting, all three men had spoken with the media in support of Spencer's speech and white nationalism.

Fears and his brother are from Pasadena. At the home listed as their address, family members opened and then shut the door.

But plenty of people knew the Fears. Until a few months ago, Colton Fears was a singer in the local rock band "Between Parallels." Fears is seen in multiple YouTube videos, and the band played at a number of clubs. Band members tell Eyewitness News that part of the reason the band disbanded was because the brothers' posts on Facebook grew more controversial in the past few months.

In Fort Bend County, neighbors near the Tenbrink family home also had stories to tell.

Rabbi Michael and other neighbors say Tenbrink would hang out in the front driveway with a number of young men, occasionally getting into arguments with other neighbors.

"Last week we came home there was a confrontation between neighbors at that house and him, there was police involvement. Every year we've been here there's been some kind of arguments," said Rabbi Michael. The Rabbi, however, also said he and Tenbrink have had long discussions about a variety of issues. He said he personally got along with his neighbor.

At Tenbrink's home, his sister, who spoke through the door, said the family wanted to be left alone.

"My brother, he is his own person and what he does is his own business but this is not our family," she said.

The three were in a vehicle Thursday immediately after Spencer's speech and began making Nazi salutes and shouting Hitler chants at a group of people holding anti-Nazi signs near a bus stop, Gainesville Police Officer Ben Tobias said.

One person in the group of about six people struck the back window of the men's vehicle with a baton, police said.

Tenbrink, a convicted felon, showed a handgun after exiting the car while the Fears brothers encouraged him to shoot, police said.

"Colton Fears and William Fears were also yelling, 'Kill them' and 'Shoot them,'" the police report stated.

The men fled the scene and headed north on Highway 75, police said.

Just before 9 p.m., an off-duty Alachua County Sheriff's deputy who had worked the Spencer event earlier saw the men's vehicle. A group of officers called in stopped the vehicle and took the men into custody.

Tenbrink admitted that he was the shooter, according to the police report.

Police say two of the three have connections to "extremist groups."