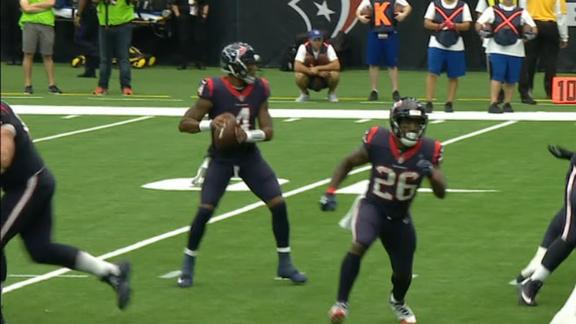 HOUSTON -- With three touchdowns on Sunday against the Cleveland Browns, Texans quarterback Deshaun Watson has the most passing touchdowns by a rookie through six games since the NFL-AFL merger.

He now has 15 on the season after throwing for three scores in the Texans' 33-17 victory Sunday.

Watson's first touchdown came near the end of the first quarter, when he found a wide-open Will Fuller down the right sideline. His second, which broke the record, was a shovel pass to wide receiver Braxton Miller, who flipped into the end zone for the score late in the second quarter. Watson also scored a third TD when he hit DeAndre Hopkins for a 3-yard score in the third quarter.

Watson was 17-of-29 for 225 yards with three touchdowns and one interception. Watson now has four passing touchdowns of at least 20 air yards, which is the most in the NFL, according to ESPN Stats & Information.

Watson now has 17 total touchdowns (15 passing and two rushing) this season. According to the Elias Sports Bureau, that ties for the most total touchdowns by a player in their first six career games. Mark Rypien and Kurt Warner each had 16.