KABC
LOS ANGELES, California -- He has been a star on stage, screen and television for decades and now Jeffrey Tambor has his own star on the Hollywood Walk of Fame.

Tambor has been one of the most versatile and accomplished character actors in film and television.

His unforgettable roles on TV revealed his unique comedic gifts. That included popular series such as HBO's "The Larry Sanders Show," where his character Hank Kingsley's catchphrase "Hey now" is still repeated to the actor today. He was the scheming family patriarch on "Arrested Development."

Tambor has also revealed his dramatic sensibilities in films such as "And Justice for All" and "Meet Joe Black."

The actor displayed his deadpan humor as he related how he was raised to be cautious about celebrating big achievements.

"My father, Barney Tambor - he didn't have a middle name they couldn't afford one," the actor said at the ceremony. "I grew up in San Francisco, and he had a saying when something big happens, he would say 'Shush, shush, don't say anything, they'll take it away from you.'"

"I'm the Jewish son of Russian Hungarian parents. That was sort of on the dishware: Don't celebrate. So Dad I'm really sorry but we're in real big trouble."

With the addition of the 73-year-old Tambor, there are now 2,617 stars on the Walk of Fame. His star is on the 6300 block of Hollywood Boulevard. 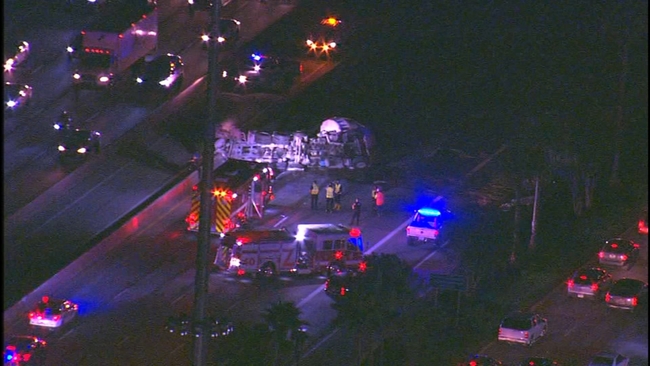 SB Gulf Freeway shut down at Griggs due to truck crash