Pilot ejects from burning F-16 during takeoff at Ellington Airport 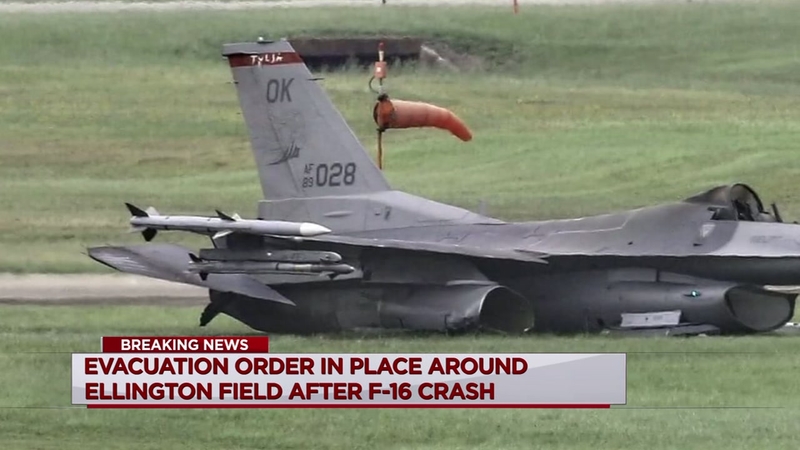 Pilot ejects self from burning F-16 near Ellington Field

HOUSTON, Texas (KTRK) -- An investigation is under way into what the Texas Air National Guard calls a "crash" of an F-16 fighter jet Wednesday morning at Ellington Airport.

The jet and its pilot were on a training mission as part of the Noble Eagle air defense program that began after September 11. The fighter jet was taking off when a series of explosions were heard and smoke rose into the air above one of Ellington's runways. The pilot is said to have safely ejected. He is with the 138th Fighter Wing based in Oklahoma, flying out of Ellington.

"From what we understand, he was on takeoff roll when something happened that we haven't determined yet," said Master Sgt. Sean Cowher, of the 147th Attack Wing of the Texas Air National Guard.

The pilot is said to have walked away after landing in the ejector seat and parachute. He was taken to an undisclosed medical facility to be checked out.

Employees and media were ordered to evacuate the airport. Continental NORAD command explained the reason for the precautions.

"There is fuel and air-to-air missiles on board," said Maj. Anthony Scott, of Air Defense Command.

A 4000-foot perimeter around the aircraft was established as an evacuation zone. It included Ellington, nearby businesses and homes on Highway 3 and Red Bluff. Houston Police told one fast food business on Red Bluff to close until the evacuation was lifted, because it was in the "danger zone."

Another complication was the jet was topped off with fuel. Even after the failed take-off, the aircraft engine continued to run, although it was described as idling. It ran out of fuel late in the afternoon, which allowed the evacuation perimeter to be reduced.

Various agencies will be part of an interim safety board, and its work has already started.