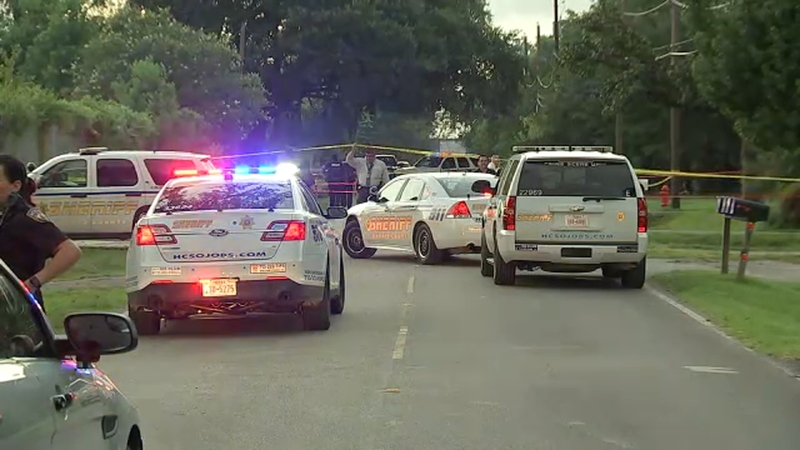 Deputies said they responded to a shooting around 2:30 a.m. in the 16000 block of Pecan Street, where a man was found dead inside a home.

According to authorities, the house is being used to stash drugs.

Multiple men allegedly broke into the house, and there was a shootout. One man was killed.

One of the people who busted into the house was also shot in the torso, dragged into the street and put into a white Ford pickup truck.

HCSO in Channelview this morning investigating a shooting the left one person dead and also trying to determine if a second body found a couple of miles away is connected to what happened here. pic.twitter.com/UC6sTIZY1f

Several men were seen running from the house, and the pickup truck sped off.

Later while deputies were still at the scene, they received a call about a crash involving a pedestrian a couple miles away at 15200 Market St.

When investigators arrived, a man who had been shot to death was found in the street.

Authorities determined he had not been hit by a car. He was the same man who was shot earlier and put in the truck. However, the people he was with dumped him in the street.

"It appears one male was shot while leaving, loaded into vehicle. So much for friendship and loyalty. He was dumped a mile and a half from here," said Harris County Sheriff Ed Gonzalez.

Deputies are looking for the pickup truck.

A third call then came in about a person who was also shot, but survived, being dropped off at a nearby hospital.

HCSO is investigating whether that third call is related.

(1) @HCSOTexas units are at a shooting scene at 16328 Pecan Street. The body of a deceased male was found inside a home and several males were seen running from the house. While at the scene, units learned of an auto-pedestrian crash nearby at 15200 Market Street #HouNews pic.twitter.com/mWq5c9bgNP

(2)-at the auto-ped scene. The body of a deceased male, with a gunshot wound was found. The preliminary info appears to indicate that both scenes are related. Homicide & CSU are responding. I’ll be going to the scene. #HouNews

Sheriff Gonzalez said it's been a violent 24 hours for his team, who investigated multiple scenes overnight.

Investigators are waiting on a search warrant to go inside the home.