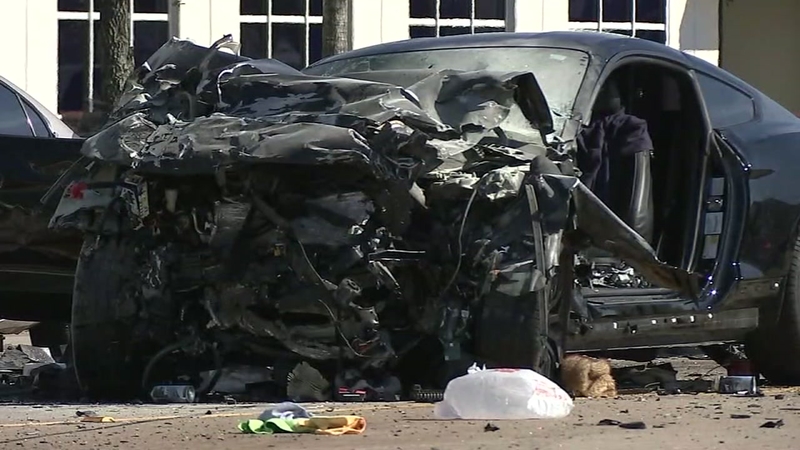 2 killed in crash with two Mustangs racing at high speed

HOUSTON, Texas (KTRK) -- Highway 249 is again open tonight, but for much of the day officers had to cope with a wide debris field left behind after a deadly accident involving three cars and an SUV.

Everywhere you turned, there seemed to be shattered glass and twisted metal scattered across all six lanes of traffic.

But it was nothing compared to the crushed cars and the SUV involved in the midday wreck that investigators said started with two Mustangs racing each other.

Sheriff Ed Gonzalez blames two drivers who he said were racing each other at speeds exceeding 90 miles per hour, just south of the Sam Houston Tollway.

The two people in the Acura, both in their twenties, were injured but will survive.

Investigators said two men were killed after a street race down Highway 249 in NW Harris Co.

The driver of the other Mustang, a man in his mid-twenties, was unhurt and now faces the possibility of several charges.

Sheriff Gonzalez said the stretch of highway is well known as a spot where racing is common.

The speed limit on that stretch of Highway 249 is 45 MPH, half of the suspected speed of the two men who deputies said made a deadly decision on Christmas Day.

Investigators have not released the identities of any of those involved.

A driver may face charges after a violent and deadly crash this Christmas Day in northwest Harris County.

Update: I’m out on the fatality accident. 1900 block of 249 (Tomball Parkway) will be shut down, between Hollister and Seton Lake as @HCSOTexas handles investigation. Will be shut down at least 4 hours. May have stemmed from car racing #HouNews. pic.twitter.com/nR6c6HstuK