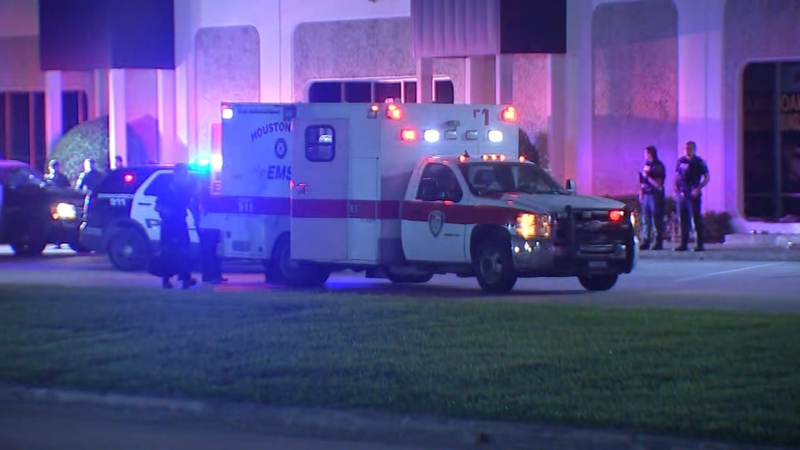 HOUSTON, Texas (KTRK) -- A 19-year-old was shot by a Houston police officer early Tuesday morning after he allegedly fired shots during a traffic stop.

The shooting happened just after 4 a.m. in the 5700 block Bonhomme Road near Harwin on Houston's southwest side.

According to Houston Police Chief Troy Finner, an officer saw a car leaving a car wash on Harwin at a high rate of speed without headlights turned on.

That's when the officer attempted to conduct a traffic stop. The suspect led the officer on a short pursuit before jumping out of his car, Finner said.

Preliminary information is the suspect shot at an officer following a traffic stop. The officer returned fire, striking the suspect who was transported. Officer not hurt.#hounews pic.twitter.com/f1xG62y4tK

The suspect fled on foot and the officer chased after him. That's when the 19-year-old suspect fired his weapon at the officer, according to Finner.

The officer returned fire, hitting the suspect at least one time in the leg.

"He is armed. Watch out... Shots fired. Shots fired," an officer could be heard reporting on radio traffic. "Suspect hit. Still conscious and breathing."

Finner said the officer applied a tourniquet to the suspect's leg and called for an ambulance.

The suspect underwent surgery on his leg and is expected to survive, according to Finner. The officer involved was not hurt.

"I'm glad that our officer is OK. I'm glad the suspect is going to be OK," Finner said. "I ask that our community continues to pray for everybody, especially our officers on the frontlines during a difficult time."

Finner described the suspect as a 19-year old white man, and the officer as an Asian man with six years with the department.

"I don't know his criminal record. I don't know his name right now. I just know his age," Finner said. "But, a young man, 19 years old, he should be at home sleeping at 4 o'clock in the morning, not out here shooting at police officers."

The suspect's pistol was recovered at the scene, according to Finner.

Good morning from the sw side. This is what we are seeing right now. Police tape and officers. Gathering more info. https://t.co/p5otR3P1gF pic.twitter.com/0fsNVhrMAW