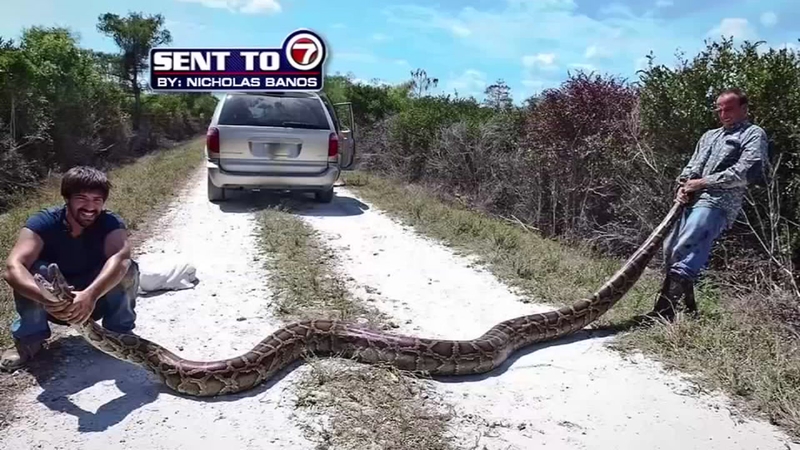 EVERGLADES, Florida (KTRK) -- Two South Florida men have quite a story to tell after what they encountered in the Everglades.

Two snake trappers got their hands on a 15-foot python on Saturday after the massive snake put up a fight.

"The first day of the challenge, we caught the biggest snake," hunter Nicholas Banos told WSVN.

Banos and trapping partner Leonardo Sanchez were driving as they were looking out for snakes during the Everglades' Python Challenge to help protect the Everglades.

"I saw a little gloss and I saw a big square brown patch and automatically, I knew what it was," Sanchez said.

Banos said as soon as he got out of the car, there it was.

"Second I get out of the car and I look over, it's this big python stretched there where the trees meet the water. And when we jumped at it, he goes and grabs it by the tail," Banos said.

The men wrestled for their catch.

"I started to try to pull it so it won't go into the water, and the snake just straight turns around and bee-lines towards my face. And that's when he came in and he jumped from behind and grabbed it by the head and he even got nipped a couple times," said Banos.

After several minutes of a struggle with the 144-pound python, they were finally able to get their grasp and put the snake into a bag and in the back of their van.

The goal of the challenge is to get rid of as many pythons as they can. Pythons are an invasive species. Animals like deer, raccoons and birds are disappearing because of the Burmese pythons.

"They're decimating the environment. I figured hey, if I could get a couple it'd be a great adventure, and I'd be able to help the environment," snake hunter Donna Kalil said.

"We don't hunt for sport. We're not hunting to kill. We hunt to remove. Catch and remove. But having to kill it was a little rough for us. We've never really had to do that before. So it was satisfying but it was also a feeling of a little bit of heartbreak," Banos said.