TOWER OF SUCCESS: Relive the historic career of Yao Ming

The stage is set and the congratulations are in order as the Houston Rockets will retire the jersey worn by Yao Ming on Friday.

Check out some of @YaoMing's most memorable plays, and don't miss his jersey retirement at halftime tonight! #ThankYouYao pic.twitter.com/ba3GmNrM9h

Selected by the Rockets as the No. 1 overall pick in the 2002 NBA Draft, Ming quickly made his presence known across the basketball world. Standing at a colossal 7 feet 6 inches tall, Ming towered over his competition and became a beacon of success for his native land of China.

The Rockets quickly became "China's team" and the league was able to expand its global impact.

Persistent injuries forced Ming to hang up his No. 11 jersey in 2011. In September, the eight-time All-Star entered the Naismith Memorial Basketball Hall of Fame.

Nearly five months after his Hall of Fame enshrinement, Ming's jersey will enter a place where few have gone: the rafters. After it was all said and done, Ming not only made his mark on the court, but captured some unforgettable moments under the Hollywood lights.

In a national Apple commercial, Ming co-starred with Verne Troyer in a spot that featured one of the tallest people in the world and the smallest. Troyer was famous for his role as Mini-Me in the Austin Powers movies.
Related topics:
sportshoustonhouston rocketsbasketball
Copyright © 2020 KTRK-TV. All Rights Reserved.
RELATED 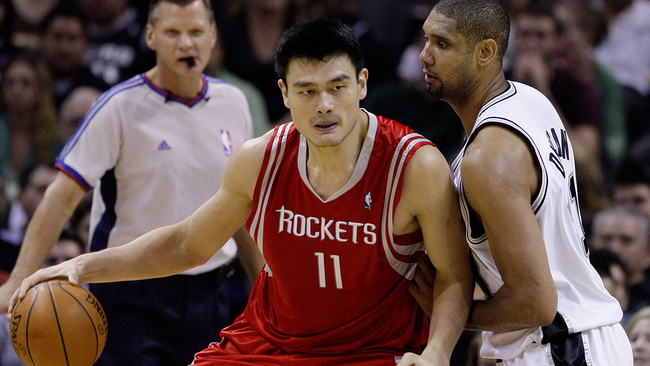