Aggies star Myles Garrett, No. 1 on Kiper's Big Board, declares for draft 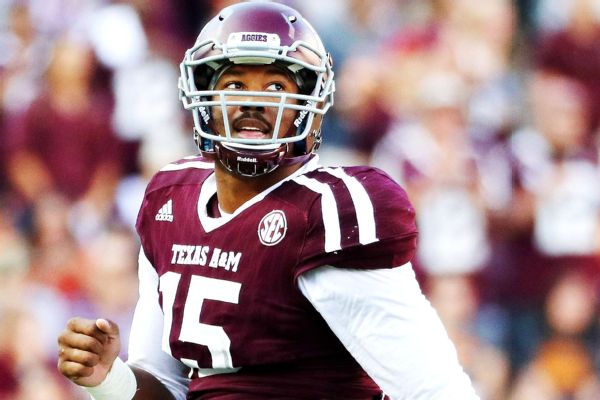 Garrett, a junior who compiled 32.5 sacks and 48.5 tackles for loss over the past three seasons, is projected to be a top-10 pick and is ranked No. 1 on ESPN Insider Mel Kiper's latest Big Board.

A 6-foot-5, 270-pound prospect from Arlington, Texas, Garrett finished this season with 8.5 sacks after playing more than half the season with an ankle injury.

"After talking with my family and my coaches, I feel it is in my best interest to declare for the 2017 NFL draft," Garrett said in a statement. "I would like to thank my teammates for always supporting me, encouraging me and holding me accountable. We are a family and I will be close with these guys forever."

In 2014, Garrett broke Jadeveon Clowney's SEC freshman sack record with 11.5. Garrett was an Associated Press All-American in 2015 and '16, and his sack total over the past three seasons was surpassed only by Tennessee defensive end Derek Barnett (33).

During interviews Tuesday before Texas A&M's loss to Kansas State in the AdvoCare V100 Texas Bowl, Garrett joked that he would prefer "not to go anywhere cold" for his NFL career but later clarified that he would play for whoever drafted him. He reiterated that in his statement Saturday.

"I look forward to the challenges that are ahead, and I am excited about the opportunity to play at the next level," Garrett said. "I will play for any NFL team that gives me a chance and they will get my very best effort."