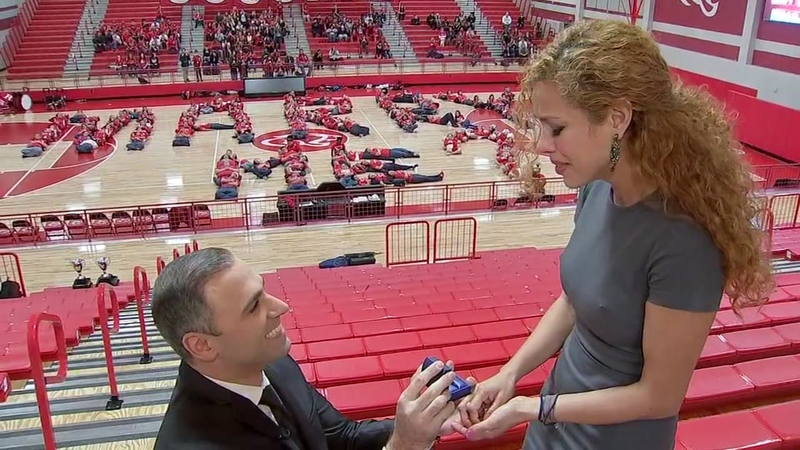 CROSBY, TX (KTRK) -- For Foti Kallergis's girlfriend Diana, today was sure to be an interesting day.

As she stepped into the ABC13 newsroom this morning, she thought she was only tagging along to help her boyfriend and our Eyewitness News colleague at work.

Together, the couple ventured to Crosby, where she got a front-row seat as Crosby High School took home our Friday Flyover trophy.

But really, it was Crosby High School who had the really good point-of-view as Foti popped a very important question to Diana.

The newscast had just ended, and Foti took Diana by the hand as they walked up the bleachers in the Crosby gymnasium.

"So, I know I told you that I am bringing you here to help with the Friday Flyover. That's part of the truth," Foti said, with a laugh.

"The other part of the truth is that I love you, and since I met you, I haven't been able to stop thinking about you."

A bride holds a bunch of flowers in this stock photo.

Foti told Diana that she taught him love is unconditional and humbling, and most of all, that "your love has healed me in so many ways."

He took a deep breath, and pointed Diana's attention to the floor of the gymnasium.

Lying on the wood floor, the proud Crosby Cougars spelled out these words with their bodies: "Marry Me."

Diana lifted her hands to her mouth. "Oh my God," she said, choking back tears.

The students erupted in a vigorous cheer, and a stunned Diana said yes.

When Foti embraced Diana for a kiss, the students screamed even louder.

"You're crazy," she said, wiping tears from her face.

The proud Crosby High School Cougars are basking in their win, our first winners of the Friday Flyover Championship trophy!