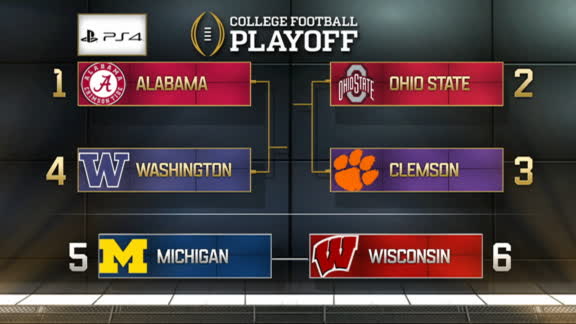 A double-overtime classic has Ohio Statesitting pretty in the new College Football Playoff rankings, while Michiganis on the outside looking in entering the final weekend.

The Buckeyes' thrilling victory at home on Saturday kept Ohio State at No. 2, behind top-ranked Alabama, but ahead of No. 3 Clemsonand No. 4 Washington, which gained from the Wolverines' loss.

Despite an impressive résumé, Michigan may need a minor miracle to make it into the playoff. By not playing in the Big Ten championship game, the Wolverines likely have to hope that Alabama (SEC), Clemson (ACC) or Washington (Pac-12) lose in their respective conference championship games. With potential losses by the Tide or Tigers not guaranteeing they will miss out on a playoff spot, Michigan could find itself rooting for Colorado(No. 8) to upend the Huskies for the Pac-12 title as the Wolverines also have a head-to-head win over the Buffaloes this season.

Kirby Hocutt, chairman of the College Football Playoff committee, said the difference between Washington and Michigan is "very, very small," while implying the Huskies' strength of schedule works against them in a résumé comparison with the Wolverines.

The final CFP rankings will be released Sunday at noon ET on ESPN.

Though Ohio State seems to be comfortably locked into the No. 2 spot, like Michigan, the Buckeyes are not playing in the Big Ten title game. That game will feature Wisconsinand Penn State, which are ranked sixth and seventh, respectively, followed by Colorado, which moved up a spot into eighth.

Hocutt said Ohio State and Penn State "are not close" to each other, though the Nittany Lions beat the Buckeyes earlier this season and are playing in Saturday's conference championship game while Ohio State sits at home.

Oklahomaand Oklahoma Stateround out the top 10 ahead of their annual Bedlam game.

Louisville, a loser of two straight, falls from No. 11 to No. 13 as it has also seen quarterback Lamar Jackson fall back toward the pack in the race for the Heisman Trophy.

At No. 14, Auburnis the second-highest ranked SEC team as it is one spot ahead of No. 15 Florida, even though the Tigers lost to the Tide in the Iron Bowl last week while the Gators will be playing in the SEC championship game this coming weekend. The SEC foes are followed by West Virginiaat No. 16.

Unbeaten Western Michiganis the best of the Group of 5 schools, earning a No. 17 ranking as Boise State lost over the weekend to fall out of both the top 25 and the chase for a spot in the Goodyear Cotton Bowl Classic. The only other ranked Group of 5 schools are Navy(No. 19) and Houston(No. 24). The Broncos will play Ohio on Friday for the MAC title, while the Mids will host Temple in the AAC championship game.

Two Pac-12 schools round out the top 20 with Stanfordchecking in at No. 18 and Utahlanding at No. 20.

Is there a path for Michigan to make it back into top four?
Kirk Herbstreit outlines the scenario where Michigan could climb back into the top four.