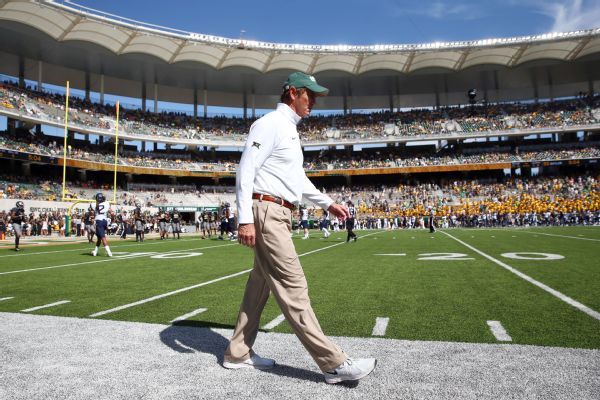 Baylor's assistant coaches released a statement via Twitter on Friday night, in which they disputed a Board of Regents member's claims that former coach Art Briles was aware of an alleged gang rape involving former Bears players and didn't report it to proper authorities.

During a meeting with the Dallas Morning News editorial board on Thursday, Baylor regent David Harper said he knew of at least one instance when Briles was told of an allegation of gang rape and didn't report it to proper authorities.

"He was made aware of one of the allegations of a gang rape," Harper told the Morning News. "At least one of them. I can't tell you if he knew or didn't know about the others."

On Friday night, Baylor's assistant coaches, including Briles' son Kendal and son-in-law Jeff Lebby, and several staff members disputed Harper's claims in a statement on Twitter. In the statement, the assistant coaches claimed the "alleged victim reported [the incident] to her head sport coach" and the coach "reported to his superior" (former athletic director Ian McCaw).

Also on Friday, Bears wide receiver Chris Platt indicated on Twitter that the Bears were wearing black uniforms for Saturday's game against TCU to protest Briles' firing, though on Saturday he denied that was the reason.

According to the assistant football coaches' statement, McCaw instructed the head coach to report the incident to Baylor's office of judicial affairs, which the coach did. The assistant coaches claimed Briles wasn't made aware of the incident involving football players and the alleged victim until nine months after the alleged incident occurred.

According to the statement, the alleged victim's coach informed Briles that he reported the incident to McCaw and judicial affairs. The statement said, "Briles told [the victim's coach] to report it to the police and prosecute the players if there was any wrongdoing."

The Baylor assistant coaches claimed in the statement that the victim's coach later said, "I think Coach Briles handled the matter honorably and with the serious attention it deserved." The statement claims that the woman's coach also stated that "Briles followed up" and was informed that the alleged victim did not want to report the incident to police.

The assistant coaches also claimed that Briles never had contact with the woman.

Briles, who guided the Bears to a 65-37 record and at least a share of two Big 12 titles from 2008 to 2015, was fired May 26 after an investigation by Philadelphia law firm Pepper Hamilton found widespread problems with the way Baylor responded to allegations of sexual assault by students, including several football players. University president Kenneth Starr also was demoted and then fired, and McCaw was suspended and then resigned.

Baylor regent Cary Gray told the Dallas Morning News on Thursday that Briles was fired because he "delegated down discipline and he operated a system where he was the last to know when he needed to be the first to know."

Hill, who was fired in late May after the Pepper Hamilton findings were released by the university, said he told the attorneys that former volleyball coach Jim Barnes had stopped by his office and told him there had been a sexual encounter between a football player and a volleyball player. Hill said Barnes told him that it had already been reported to McCaw.

"[Barnes] indicated that he had had conversations with Briles prior to seeing me," Hill said. "And he stopped by my office only to give me a pass-by FYI that he was discussing this issue with them. That was it. The issue was a potential sexual incident with a football player and a volleyball player."

Hill said he called McCaw shortly after Barnes stopped by his office, but Hill said he did not learn any more details about the incident from that conversation.

A reported gang rape by Baylor football players in 2011 shows up in an amended Title IX lawsuit filed by attorneys for Jasmin Hernandez. Hernandez was sexually assaulted by former football player Tevin Elliott and says in the lawsuit that Baylor officials knew of a culture of inappropriate sexual conduct by its football players long before her incident.

In reference to the 2011 alleged gang rape, the complaint states that "Baylor had actual knowledge of Jane Roe 4's gang rape but failed to respond promptly and equitably. As a result of Baylor's inequitable response, Jane Roe 4 transferred out of Baylor to another university."

It does not name the women or the football players allegedly involved in the incident, but sources have told Outside the Lines that the incident involving the volleyball player is possibly related.

Hill said he was asked to come to a meeting on May 26 to answer some follow-up questions regarding the Pepper Hamilton report, and when he arrived, he was told that he was being terminated "effective immediately based on the findings of the Pepper Hamilton investigation." He said Baylor officials would not tell him any more information.

It's the second time Baylor assistant coaches and staff members have made an orchestrated effort to support Briles on Twitter. In early October, after acting coach Jim Grobe disputed the university's account about the circumstances surrounding former Bears player Jeremy Faulk's dismissal from the school, eight assistant coaches and several staff members nearly simultaneously tweeted a link to a story containing Grobe's comments, along with the hashtag #TRUTHDONTLIE.

Baylor executive associate athletics director Nick Joos told ESPN at the time that the university addressed the issue of the Baylor coaches tweeting about the case.