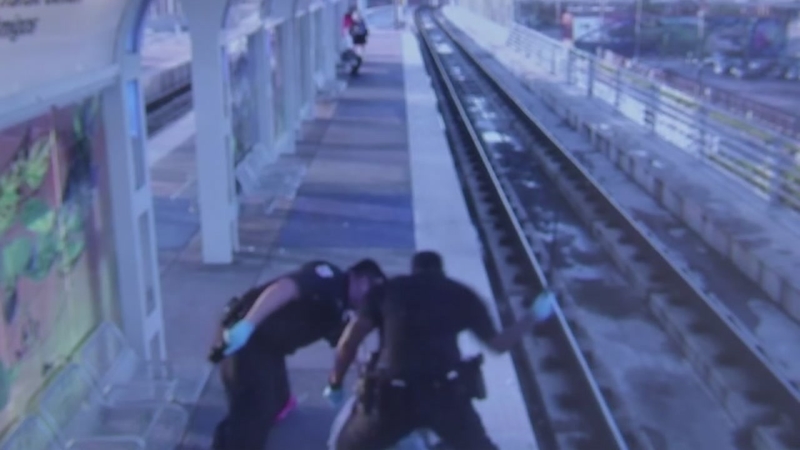 HOUSTON (KTRK) -- The METRO police chief on Monday released surveillance video showing a violent takedown by an officer on a train platform earlier this month, as the police chief announced the officer's resignation.

Officer Jairus Warren resigned Monday morning and Chief Vera Bumpers said an internal review board validated the excessive force allegations against him and recommended his termination. The investigation has now been handed over to the Harris County District Attorney's Office.

The video, which has no sound, shows Officers J. Warren and D. Reynoso approach Darrell Giles, who is slumped over on a bench on the platform. After a brief encounter, Warren draws his baton and repeatedly strikes Giles.

Giles then falls onto a bench and eventually onto the ground, writhing in pain. Warren continues to hit Giles, even after he falls to the ground. The beating lasted about 19 seconds.

Officer Reynoso appears to intervene toward the end of the confrontation. He has been cleared of wrongdoing and returned to service, although he will be required to undergo additional training, Bumpers said.

Giles was checked by medics at the scene of his arrest, but was then taken in for processing, at which point he began to complain of pain in his arms and received further medical attention. The charges against him were later dropped.

"I thought he pulled a gun out," Giles told Eyewitness News on September 17, a few days after the altercation. "He hit me so hard, he knocked me to the ground, so the first couple licks, he's just standing over me going bom, bom, bom making some noise."

"I don't remember too much. All I remember is bracing myself and just taking the licks and I was holding my arm up," Giles added.

Chief Bumpers also released video of a previous encounter officers had with Giles on the platform that same day.

"They had dealt with him a couple of times earlier that morning asking him to leave the platform and he was combative," she said. Train operators had also asked him to leave, Bumpers explained.

Their stories appear to differ, because Giles said, "When he told me to leave, I left."

The video shows him appearing to be combative as he walked off. He told Eyewitness News he circled back to the platform to get his cell phone, which he had left behind, and that's when he encountered Officer Warren again.