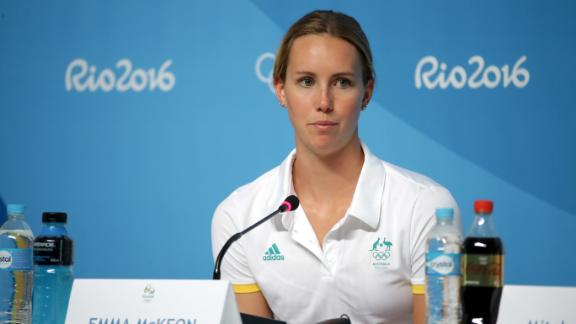 RIO DE JANEIRO -- Australian swimmers Josh Palmer and Emma McKeon have been banned from participating in the Olympics closing ceremony by delegation head Kitty Chiller after a night out on Copacabana beach in which Palmer allegedly was forced to withdraw money from an ATM and lost his wallet and phone.

The decision comes after the pair failed to return to the Olympic Village, without informing team management, after a night out in Copacabana. McKeon is said to have spent the night with friends after leaving a nightclub in the "early hours of the morning," according to a statement from the Australia Olympics Committee.

Palmer, who finished fifth in his 100-meter breaststroke heat on Aug. 6, decided to continue drinking with a friend and his night took a turn for the worse.

The AOC statement reads: "Palmer has told officials that after his friend left he was approached by a man who forced him to withdraw AUS $1,000 in cash from a nearby automatic teller machine.

"Palmer was found later by two businessmen in the Copa district who reported the swimmer was disoriented and had lost his wallet and phone. They phoned the Australian Consulate who then contacted the head of security for the Australian Olympic Team, Greg Nance."

Palmer did not make a formal complaint to the police, and he was picked up at the consulate by team leader Wayne Lomas.

Chiller calls their decision not to inform team management of their whereabouts "disrespectful" and has imposed a new 2 a.m. curfew on all Australian athletes for the rest of the Games while McKeon and Palmer are prohibited from leaving the Olympic Village between 8 p.m. and 8 a.m..

The news comes after the AOC decided to ban athletes from heading on to the sand of Ipanema and Copacabana beaches after nightfall due to the risk of petty crime.

"Given the security problems we have encountered over the past few weeks, I find the behaviour of the disciplined athletes disrespectful to the remainder of the team," Chiller said.
Related topics:
sportsespnnews uk olympicscopacabanaaustraliakitty chillerjosh palmerclosing ceremonyswimmingemma mckeonipanemaaocwayne lomasolympic sportsrioaussies in actionatm
Copyright © 2021 ESPN Internet Ventures. All rights reserved.
More Videos
From CNN Newsource affiliates
TOP STORIES