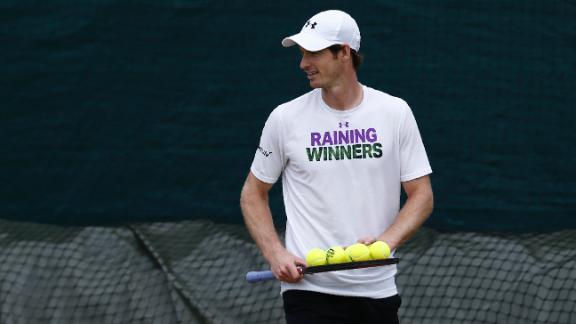 WIMBLEDON, London -- Nick Kyrgios apologised for calling a member of his entourage "retarded"during his win over Feliciano Lopezat Wimbledon.

The Australian looked angry with the support team in his players' box on Saturday, demanding they give him more vocal support or leave the court in a match held up for bad light.

"It's all in the heat of battle," Kyrgios told a media conference after completing the win on middle Sunday. "I know some people can obviously get offended by that. I'm not meaning to be rude or disrespectful at all."

The 21-year-old's fellow Australian Bernard Tomic also apologised after his first-round match for saying he "had to stand on court like a retard" as he waited for Fernando Verdasco.

But Kyrgios, who will meet Andy Murray on Monday in the fourth round, was quick to play down any issue with his team. His family are staying with him in Wimbledon for the tournament and he put his outbursts during the match against Lopez down to his frustrations boiling over.

"Sometimes I'm just a pest," he said. "They're always doing the best they can do. It's obviously in the heat of the battle. Everything I say and everything I do out there, they all know I love them. So it's OK."

Shouting at his box is not the only habit he shares with Murray, it would seem. They are close friends off the court with Kyrgios joking it was "love at first sight" for the greatest bromance in tennis.

Kyrgios' reputation as the volatile bad boy of tennis has followed him around these Championships with outbursts at an umpire and reporters, but Murray leapt to his defence and said the media "try and wind him up".

It is clearly invaluable to Kyrgios having someone of the world No.2's stature to defend him in public. "He backs me up a lot, which is good. It's just good to have one of the best players in the world, to have a good friend like that. I see him at times more than I see my family," he said.

"When Andy walks in [to the locker room], we see each other, we just give each other a look. We can't stop looking at each other for a bit.

"When I see Roger [Federer], everyone sort of just looks at him. Roger has an aura about him. I think he's the greatest player of all time. I just watch him. I don't say anything. It's the same with Novak. But Andy, I don't know, it's different.

"Our relationship is pretty good. We joke a lot. When he's in the locker room, it's just instant banter. We just have a lot of fun. He's a very relaxed guy, down to earth. He baits me a lot of the time. He's always very funny. It helps. He's a great guy.

Their relationship is reminiscent of John McEnroe and Bjorn Borg. The seven-time major winner famously said that "to have Bjorn behind me, it was like, 'to hell with everyone else'".

McEnroe tended to be on his best behaviour when playing Borg, too, but the respect and admiration Kyrgios has for Murray doesn't necessarily mean he will show any more emotional control against him on Monday, if their three previous Grand Slam meetings are anything to go by.

Kyrgios was warned for swearing and also smashed his racket at the 2015 Australian Open, and called out "I hate this place" at Roland Garros the same year.

At last year's US Open he swore, smashed his racket and, during the changeovers, slumped back in his chair and closed his eyes -- it looked as though he was having a nap. That match came shortly after the ATP put him on probation for comments he made to Stan Wawrinka.

Murray won all three of those matches, as well as their only other meeting at the Canadian Masters in 2014, for the loss of just one set. Still, Kyrgios fancies his chances against the Scot, who is 18-0 against Australians and the odds-on favourite to win Wimbledon following Novak Djokovic's shock exit.

"As soon as Novak loses, you look at Andy and you look at Federer's eyes light up. They think that their chances probably doubled," said Kyrgios.

"I definitely feel like he's [Murray] beatable. He's only human. At the same time he's a great player. I don't think there would be too many people with a winning record over him, not just Australians.

"This is probably my best surface, my best chance to beat him. At the same time he's pretty comfortable on the grass. I feel like I know what to do. But it's hard to actually go out there and execute against such a player like him.

"When you look at Andy, he's a great athlete. Moves extremely well. He knows the game so well. He's practically a brick wall from the back. He's a great returner. Can mix it up. He just competes well, as well.

"There's not many weaknesses there. The only person he really loses to is Novak. The biggest difference is I play a little bit more aggressive to Andy. I don't move anywhere near as well."

There is one area of his game where Kyrgios trumps Murray, at least. "I don't know if he's got the tweener like I do," he said smiling.