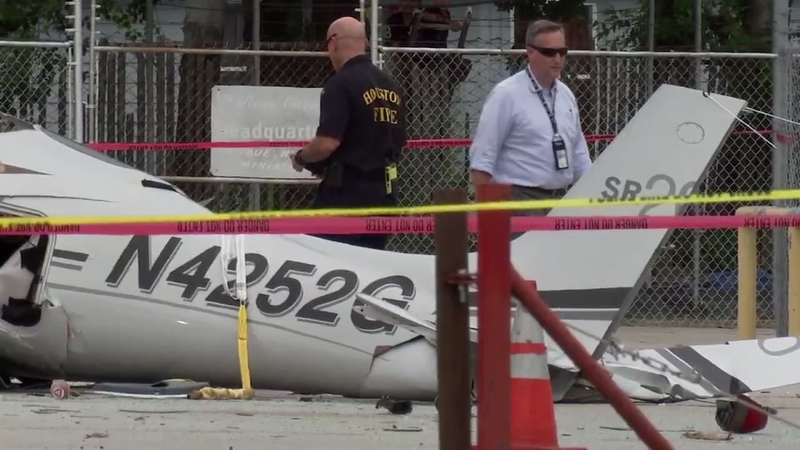 HOUSTON (KTRK) -- Three members of an Oklahoma family were killed this afternoon in a small plane crash near Hobby Airport.

A National Transportation Safety Board spokesman says the plane crashed at 1:12pm into a vehicle parked outside an Ace Hardware store in the 6800 block of Telephone. No one was inside the parked car, but all three people aboard the plane died immediately.

Police in Moore, Oklahoma have identified the victims as Tony, Dana and Jerry Gray. Dana and Tony were married; Jerry was Tony's brother. They were flying from Norman, OK to Houston to visit the brothers' father who is a patient at MD Anderson Cancer Center, according to a family friend. Dana Gray was the pilot.

"Dana was a very safe pilot. She loved flying. She's been flying that plane for a very long time," said Jeremy Lewis, a family friend and also a sergeant for the Moore Police Department. "Pretty much anyone in Moore know who the Grays are. They're very involved with the community. They're just the best people and it's just unbelievable three of them are gone."

The NTSB said the Cirrus SR-20 plane, a fixed wing single-engine aircraft, was en route to Hobby Airport. Gray was trying to land but the plane was too high, so the air traffic controller told them to go around the towers and try again. The air traffic controller also warned about wake turbulence from a nearby 737. During a second attempt, the spokesman said the plane nose-dived into the ground.

Audio released by air traffic control revealed the final moments before the crash: "Ma'am, ma'am, straighten up! Straighten up!"

"I saw the plane. It was going everywhere, all over the place," Navisa Artani said.

That model plane is equipped with a parachute. NTSB investigator Tom Latson said the rocket motor deployed but the parachute never did and it's unclear whether the deployment was before or during the crash. There was no mayday call.

In the seconds before the plane crashed, eyewitnesses say they heard something that could prove critically important to investigators.

HFD says the plane crashed just before 1:15pm into a vehicle parked outside an Ace Hardware store in southeast Houston.

"You ever listen to those guys playing with toy airplanes? How the spit and sputter. That's what he sound like," said eyewitness Don Howard.

That sound was corroborated by others nearby.

As the plane crashed outside the Gateway Ace Hardware, Ann Maryland was at work inside.

"It was like a transformer had blew, it was real, real loud and it shook the building," she said.

Houston Fire department Capt. Ruy Lozano says there was no HazMat spill or fire as a result of the crash.

The NTSB plans to return to the crash site Friday to continue the investigation. The aircraft manufacturer and engine manufacturer will join federal investigators.