Victim's mom: Suspect 'has to pay for what he did' 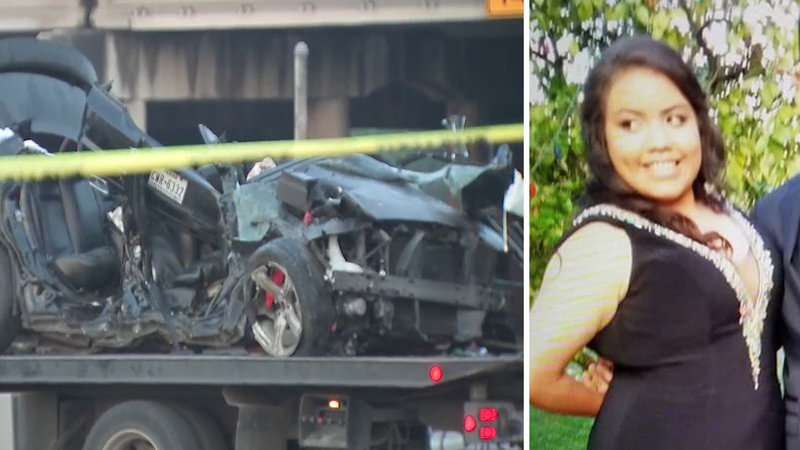 HOUSTON (KTRK) -- A family is in mourning after a deadly wreck that all began with a police chase.

Lives were suddenly changed overnight when a suspected drunk driver slammed his pickup truck into a car carrying two teenagers coming home from the prom.

The mangled wreckage of both vehicles tell the story of a violent crash that killed YES Prep North Central student Jocelynn Valero and injured her prom date.

Houston Police say the crash happened around 1am at the intersection of the North Freeway feeder road at East Tidwell Road. That is where a special ops DWI unit saw a pickup truck driver make a U-turn and go over a curb.

When officers tried pulling over the pickup truck, the driver, identified as Edin Palacios-Rodas, 27, allegedly sped off. Investigators say the driver went over several curbs at a high rate of speed, dangerously hauling through a Fiesta parking lot.

Palacios-Rodas allegedly ran a red light at the intersection at East Tidwell Road, smashing the truck into a Dodge Charger. Inside were the two teens, who had just left an IHOP restaurant. Only hours before, both were dancing and celebrating with friends at the prom.

Witness Michael Johnson said he heard the crash and said it sounded like a boom.

"Just feeling sorry for her family, what they have got to go through," said Michael Johnson, a witness.

Jocelynn Valero's family had plenty to tell Eyewitness News about the loved one they have now lost. Her mom says she was a sweet girl who always had a smile on her face.

The mother had harsh words for Palacios-Rodas, who is now in police custody accused of killing her only daughter.

"I just want to say the guy who killed my daughter, he has to pay for what he did," she says.

Sadly, the family are no strangers to tragedy. Just five weeks ago, the victim's brother was gunned down outside a nightclub. Police are still looking for the killer in that shooting.

The victim's cousin says it's a hardship the family will have to endure together.

"There is a huge open wound in my family right now," she says, "for my dear aunt and my dear uncle who have already lost..."

We'll have more from her family today on Eyewitness News at 6pm.

Meantime, the victim's prom date is said to be doing better after surgery.

YES Prep released a statement saying,"Our entire community is mourning the heartbreaking loss of one of our bright shining stars and praying for the recovery of another student critically injured in the same incident. We hope that the person responsible for the reckless behavior that prematurely ended a precious life and endangered another will be held accountable through our justice system and we will support the investigation in every way possible. As a system, we are keeping in contact with both students' families and the police department, and will be deploying additional student support to our campus as they cope during this difficult time. We send our deepest condolences to the families and we ask that their need for respect and privacy at this time be honored."