HOUSTON (KTRK) -- Residents impacted by flood waters from Monday's storm event are on edge, as a new line of rain and storms moves into the Houston area this morning.

FLOODING AREA UPDATES:
Areas to the north and northwest sides of Harris County are the hardest hit by the storms.

Bear Creek area
Chauncy Glover was at Clay Road and Highway 6, which is blocked off all the way up to Park Row, certainly a big headache for drivers especially right in the middle of rush hour trying to maneuver around a major road. The problem in this area is at the Addicks Reservoir is taking on and enormous amount of water and that's causing major problems, not only on the roads, but also inside the neighborhood folks in the Bear Creek community are seeing water in their homes and near their homes. There's also a number of road closures in this area including Highway 6 beginning at Clay Road and officials say it's going to take at least 4 to 6 weeks before Highway 6 will reopen.

Katy was one of hte communities hit hard by flooding this week.

Steve Campion reported from Katy where cleanup efforts are underway. The hardest hit area appears to be in Old Town Katy just off Avenue D near Cane Island Creek. Flood waters destroyed the Inngais family's home, their computer repair shop, and salon. They spent the day throwing out belonging, drying out floors, and trying to salvage anything. Over off Barley Lane, family helped Calvin Robinson clean out his flood damaged home. He told Campion, "We'll try to rebuild, man. Try to rebuild, man. Try to redo it. It's home. What can we do?" It is receding, but not fast enough for the residents here. Send your photos to news@abc13.com or upload at iwitness.abc13.com. You can also post to social media with #abc13eyewitness.

Westador residents are using kayaks to navigate their flooded neighborhood.

In northwest Harris County, the sheriff's office continues to run its airboat into the flooded Westador subdivision. At this point, they are bringing out pets and bringing in groceries for people who decided to stay. The water from the flooded Cypress Creek remains high, with as much as 5 feet of water in homes that border the creek. It is receding, but not fast enough for the residents here. Send your photos to news@abc13.com or upload at iwitness.abc13.com. You can also post to social media with #abc13eyewitness.

Residents are watching the water level in the Cypresswood area.

Families living in the Cypress Gardens neighborhood are keeping a close eye on the flood waters. Water from nearby Cypress Creek flooded several homes and forced some families to evacuate. Randy Burgan helped his elderly mother escape flood waters earlier this week. Most of her living room furniture is now damaged. About a foot of water entered her home. Burgan said her home hasn't flooded like this since Tropical Storm Allison hit.

Kingwood was one of hte areas hard hit by flooding this week.

Here at Forest Cove in Kingwood Houston firefighters have performed multiple evacuations of people who are stuck in their townhomes and apartments. As of 1 o'clock that helped at least 15 people escape the rising water of the San Jacinto River and get a higher ground in Kingwood. HFD is using multiple boats and even a city dump truck as a high water vehicle to remove those who want out. None of the evacuations are considered medical emergencies or rescues, but with the water rising some suggest it's better to get out now rather than later.

On behalf of Houstonians, Ted Oberg suggests we've had enough of the rain.

Flood waters have begun receding for Spring Creek, and the National Weather Service is forecasting that it may rise just a little again, before continuing to fall. Where the Hardy Toll Road meets I-45, water remains below the bridge. Debris is visible along the roadway along the high water mark.

VIDEO: On behalf of Houstonians, Ted Oberg says 'enough' with the rain

Tom Abrahams reports along the San Jacinto River in Humble

Tom Abrahams reported from Humble this morning, where water is completely covering Hamblin Road at Highway 59. Water from the San Jacinto River and Spring Creek made Hamblen impassable and flooded an nearby antique shop. More rain has been falling across the area, which could slow the water from receding.

Send your photos to news@abc13.com or upload at iwitness.abc13.com. You can also post to social media with #abc13eyewitness.

WATCH: Tom Abrahams from a flooded 59

Marla Carter reports on rescue operations in the Aldine-Westfield area

Reporter Marla Carter was at an apartment complex in Spring where cars where residents were trapped. Many cars were under water, as well. One resident, whose name is Juanita, told us she stayed because she thought the water would go down.

"It flooded a few years ago like this but it went down in a day, so we though ti was going to recede, but it's just getting higher and higher," she said.

If you're in this area, send photos or videos to us at news@abc13.com or post them using #abc13eyewitness.

Rain is already coming down in #Katy. It's making for some slick roads. Drive safely. #hounews #abc13 @abc13houston pic.twitter.com/mtSkTh0GEA

ROADS CLOSED:
Roads remain closed due to high water around the greater Houston area, as a bayous are out of their banks. Here's the latest list.

DEATH TOLL:
Eight people lost their lives in the historic flooding this week.

The floodwaters are starting to recede, but some areas could see four more inches of rain over the next two days.

All bayous within the city of Houston are back in their banks.

SHELTERS:
The American Red Cross has opened additional shelters to aid those impacted by severe rain and flooding throughout the Greater Houston area. The full list of shelters is below:

These shelters will be open 24 hours a day, providing a warm, dry place to stay, food and emotional support for area residents who are not able to remain at their homes due to storms and flooding.

VOLUNTEERS ARE NEEDED! Volunteers are greatly needed to staff shelters as well as distribute food and provide other services to those in need. Training will be provided on site. Anyone interested in assisting this way is encouraged to go to redcross.org/volunteer or call 713.313.5491.

TO DONATE: Those who wish to donate to flood relief may do so at redcross.org/donate.

WATCHES AND WARNINGS
A Flash Flood Watch is in effect for parts of southeast Texas until 7:00pm Wednesday.
EMBED More News Videos

Several cars are flooded this morning in north Harris County

Houstonians who have experienced flooding damage to their homes should report it immediately to Houston 311. There are three ways to do that:
1. Call 311 (713.837.0311)
2. Visit houston311.org and click on "Flooding"
3. Download the Houston 311 App for Android or iOS

To keep track of the weather, download the free ABC 13 Weather App. 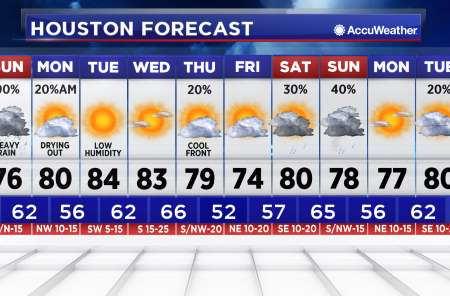