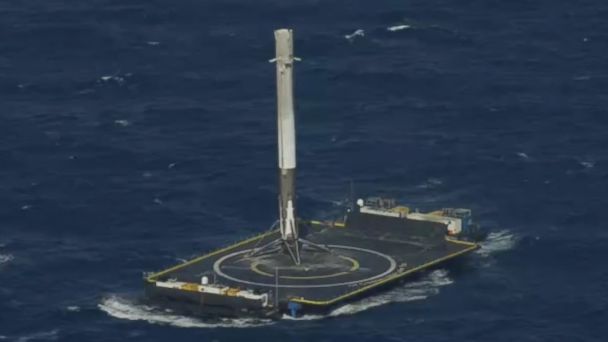 After a picture perfect launch of Dragon to the International Space Station, SpaceX successfully landed a rocket for the first time on a drone ship parked off the coast of Florida.

Today's attempt was the fourth time SpaceX had tried to land its Falcon 9 on a drone ship. The rocket has not been inspected but appeared to land upright in relatively calm waters -- a stark difference from previous attempts that have resulted in fiery crash landings.

"The rocket landed instead of putting a hole in the ship or tipping over," SpaceX CEO Elon Musk said in a news conference after the successful landing, later adding: "It's another step toward the stars."

SpaceX successfully landed a Falcon 9 rocket in December on land after launching a satellite into orbit. Having the ability to recycle rockets is something Musk has said will "revolutionize access to space," reducing costs by as much as a factor of one hundred, he said.

Mastering a drone ship landing is necessary when it is "just not physically possible to return to launch site," Musk previously explained. The drone ship landings are especially needed for "high velocity missions," which would allow payloads such as satellites to reach a higher orbit, such as geostationary orbits, he said.

The liftoff this afternoon from Cape Canaveral in Florida marked the first resupply mission for SpaceX since an explosion after liftoff last June that destroyed Dragon and the thousands of pounds of cargo on board.

The rocket is being welded to the deck using steel shoes so it doesn't tip over during its trip back to port, Musk said. The plan is to re-fire that rocket about 10 times on the ground to test it before using it on a mission, possibly as early as June, he said.

On board Dragon is a very special piece of cargo, called the Bigelow Expandable Activity Module, or BEAM for short. This is a fabric room NASA envisions astronauts will be able to set and pack up with ease. Sensors inside BEAM monitor temperature and radiation changes and how well it handles potential orbital debris.

"When we're traveling to Mars or beyond, astronauts need habitats that are both durable and easy to transport and to set up. That's where expandable technology comes in," NASA said in a blog post. The idea was first conceptualized by NASA in the 1990s and was built by Bigalow Aerospace.

Astronauts will only enter BEAM to collect data during its first test in the micro-gravity environment. NASA plans to keep the airlock between BEAM and the space station closed. If punctured, BEAM is designed to slowly compress, ensuring that it doesn't pose any danger to the space station.

Along with BEAM, the spacecraft is packed with 7,000 pounds of cargo, including food, supplies and science experiments.

Dragon will also bring important cargo back to Earth in May, carrying some of the biological samples collected during astronaut Scott Kelly's historic one-year mission in space.