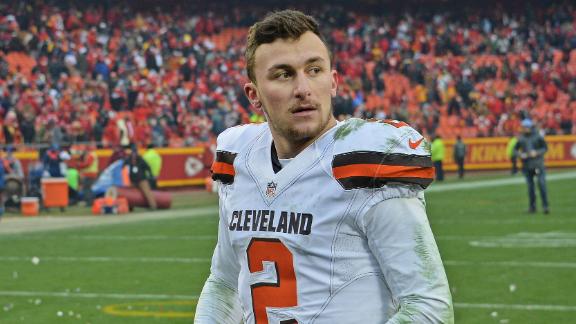 "They expect [the ear] to heal, but it'll take a while," attorney Kathy Kinser told NBC5.

Manziel is the subject of a criminal investigation into the alleged assault that took place in the early hours of Jan. 30. Crowley spoke with Dallas police on Friday to file the complaint.

On Monday, Kinser told NBC5 that Crowley still could not hear out of that ear.

Manziel told TMZ that the assault did not happen. A call to the attorney listed as Manziel's representation was not immediately returned.

A Dallas police spokesman said Monday there was nothing new to release on the investigation.

Crowley filed for a protective order last week in Tarrant County, Texas. The order was issued, and Manziel has to stay away from Crowley for two years.

A copy of Crowley's affidavit asking for protection was included in the NBC5 story.

Included are the details that Crowley states led to her being hit in the left side of the head.

The affidavit states that Manziel dragged Crowley down some back steps to the hotel exit. As they passed a valet, Crowley states she pleaded with a valet as the pair left, saying: "Please don't let him take me. I'm scared for my life!" The valet responded that he didn't know what to do.

Manziel took her to Crowley's car, where she states she got in the car's passenger seat "against my will." As he was backing up, she jumped out, ran across the street and hid in some bushes.

Manziel made a U-turn to where she was, grabbed her by her hair and threw her in the car.

"He hit me with his open hand on my left ear for jumping out of the car," the affidavit states. "I realized immediately that I could not hear out of that ear, and I cannot today [Feb. 3, the date of the filing]."

Crowley writes that the argument continued on the way to her apartment and in the apartment itself.

"I continue to be extremely concerned for my health and well-being," she wrote.

The judge issued the protective order Feb. 4, the day after Crowley's filing.