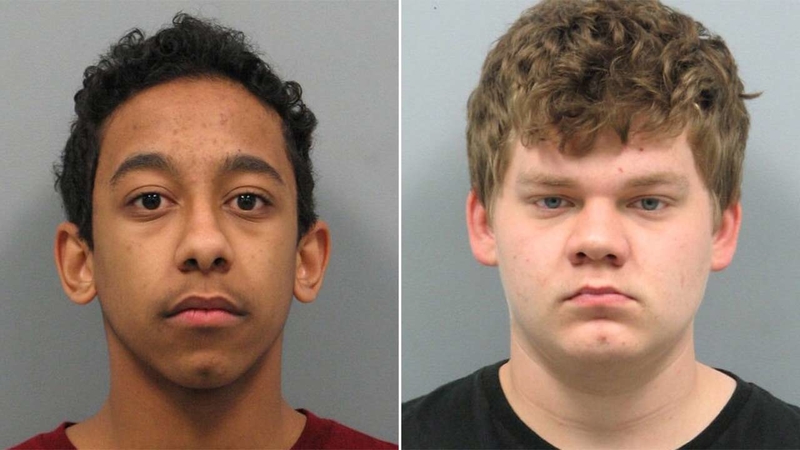 HOUSTON (KTRK) -- Wearing a hoodie in the courtroom, high school student Tony Warner faced a judge for the first time Thursday morning. Warner and his friend Seth Phillips are both facing very serious charges. They are accused of conspiring to commit murder at their high school, Cypress Ridge.

"I think it's a horrible thing," said Antoinette Cobb, a substitute teacher at the school. "I think that they need help, and counseling. They would need some type of structure to help them."

Court documents allege that earlier this week, the two young men told some students not to come to class. Investigators were tipped off when another classmate told school officials of the alleged threats. At Phillips' probable cause hearing, prosecutors detailed the weapons allegedly found in his bedroom.

"Inside the room they found a knife inside one of his pillows, and a knife inside the jacket pocket that belonged to the defendant," said the prosecutor on the video. "They also found knives in Warner's bedroom, the co-defendant."

Investigators say they also found a to-do list, where tasks for the duo were allegedly written out. They included tasks such as get knives, get money, and "ID people to kill" written out. Both students' defense attorneys, though, said this is just a misunderstanding.

"He's a good kid, good student, very young, 17 years of age," said Murray Newman, defense attorney for Phillips. "He's obviously overwhelmed at what's going on, and it's all going to be a misunderstanding."

"I'm sure he's going to be exonerated, cleared of any guilt, any wrong doing whatsoever," said Lionel Castro, the attorney for Warner.

Warner and Phillips are both out on bond. However, both will be attending an alternative school, and not return to Cy Ridge. Meanwhile, students we talked to are hoping things return to normal.