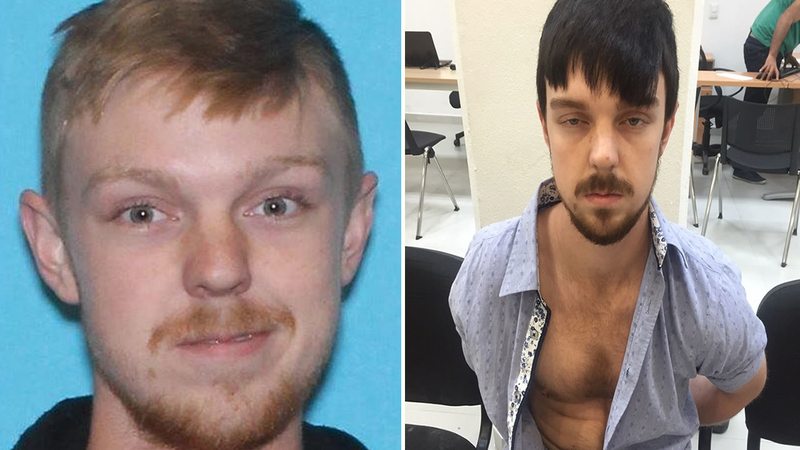 FORT WORTH, TX -- The Texas teenager who used an "affluenza" defense in a fatal drunken-driving wreck arrived in Texas following his deportation from Mexico on Thursday, more than a month after he and his mother fled the U.S. as prosecutors investigated whether he had violated his probation.

Ethan Couch, 18, was apprehended with his mother in the resort city of Puerto Vallarta on Dec. 28, after a call for delivery pizza tipped off authorities to their whereabouts. His mother was quickly deported, though Couch initially fought his deportation.

But his attorneys recently dropped the fight, and uniformed Mexican immigration agents put Couch aboard a commercial flight to Texas on Thursday morning. He arrived at Dallas-Fort Worth International Airport late Thursday morning and could be seen walking through the airport escorted by law enforcement.

Authorities believe Couch and his mother fled Texas in her pickup truck after an online video appeared to show Ethan Couch at a party where people were drinking. Couch had been sentenced to 10 years' probation in juvenile court for the 2013 drunken-driving wreck, and the terms prohibit him from drinking or leaving Tarrant County, Texas.

During the trial in that case, a defense witness argued that Couch had been coddled into a sense of irresponsibility by his wealthy parents, a condition the expert called "affluenza." The condition is not recognized as a medical diagnosis by the American Psychiatric Association, and its use drew widespread derision.

Couch's mother, Tonya Couch, is charged with hindering the apprehension of a felon. She was released on bond in early January, after being fitted with an electronic ankle GPS monitor, to the home of another son.

According to an arrest warrant, Tonya Couch is accused of telling her estranged husband, Fred Couch, that he would never see her or his son again before fleeing.

A detention warrant was issued for Ethan Couch in December after he missed a meeting with his probation officer. Investigators said he appeared to have tried to disguise himself by dying his blond hair black and his beard brown when he and his mother were found in Mexico.

Video released Thursday by the Mexican immigration institute showed Couch wearing a bluish camouflage-print hoodie, being escorted out of the detention center before dawn, and being escorted onto the plane by four agents who didn't appear to be armed. He had been in immigration custody for 28 days.

Couch is seen with a full, light-brown beard on the institute's video, showing little emotion as he is placed aboard a pickup truck and driven out of the gated detention center.

"I gave him several options, but he decided to go to Texas to face whatever charges he faces," Benitez said.

Ethan Couch will be held in a juvenile detention center in Texas, where a juvenile judge will hold a hearing to decide whether to continue to hold him there, book him in an adult jail or let him go, according to Tarrant County Sheriff Dee Anderson.

A separate hearing is scheduled for Feb. 19 to determine whether Couch's case is transferred to the adult system. If it is transferred and Couch violates his probation again, he could face up to 10 years in prison per death.
Related topics:
mexicou.s. & world
Copyright © 2021 by The Associated Press. All Rights Reserved.
More Videos
From CNN Newsource affiliates
TOP STORIES