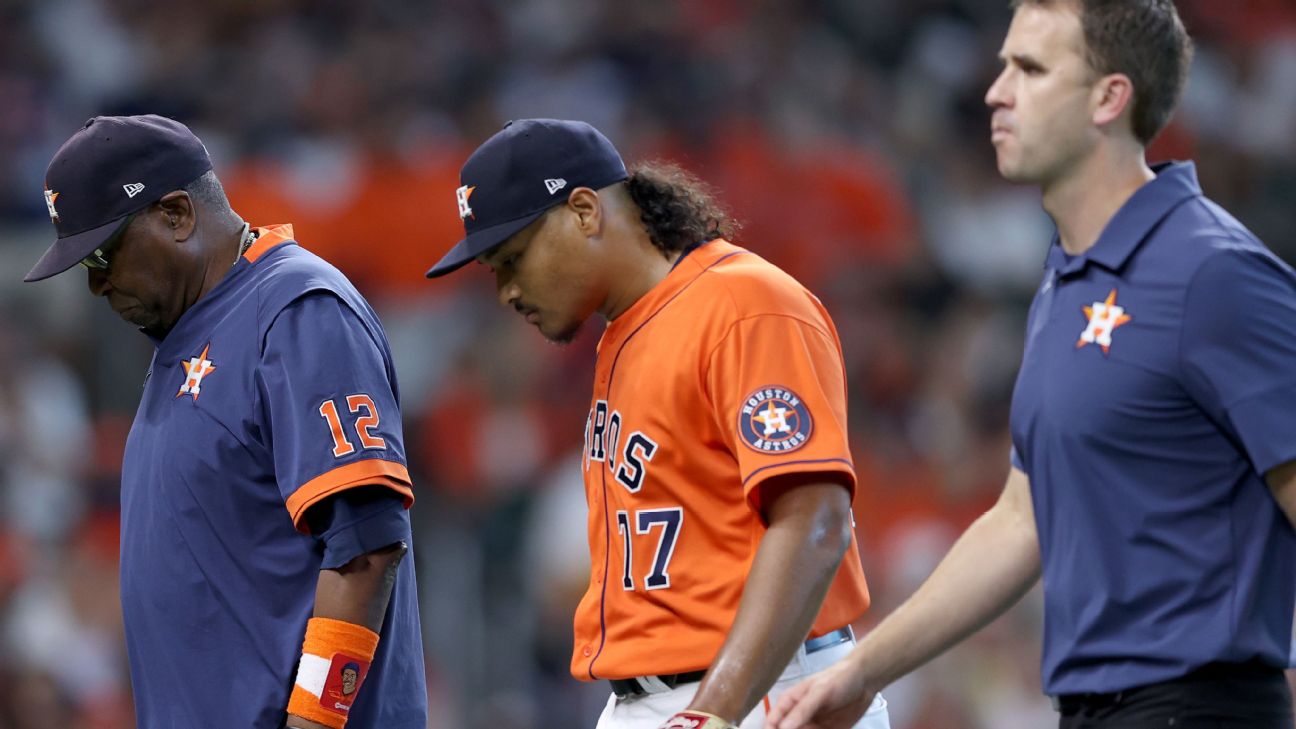 Astros manager Dusty Baker admitted the injury probably affected Garcia's performance after he allowed a first-inning grand slam to J.D. Martinezthen walked the leadoff man in the second, on four pitches, before leaving.


"I think it was his push-off leg," Baker said after the Red Sox posted a 9-5 win to even the series 1-1. "He had a strain in his knee, and he is being evaluated by our doctors."

Baker couldn't say if Garcia would be replaced on the ALCS roster. If he needs to come off, due to an injury, he would be ineligible for the World Series. He lasted only 2 innings against the Chicago White Sox in the ALDS, but it's not known if his knee was bothering him during that outing.

"It came to our knowledge that this has kind of been bothering him a little bit on and off, but he hadn't said anything about it," Baker said. "It wasn't bothering him enough not to pitch."

The injury -- combined with one to veteran Lance McCullers Jr., who is not on the ALCS roster -- puts the Astros in a bind. They used Jake Odorizzi in relief of Garcia on Saturday even though he was scheduled to start Game 4. That's no longer an option.

"We've got to try to figure it out," Baker said. "We've been trying to avoid using Odorizzi the first couple games. That's why we used everybody yesterday [in Game 1].


Rafael Devers took Odorizzi deep after the Astros righty took an especially long time to warm up. By rule, a pitcher entering the game to replace an injured one can take as much time as he desires to get ready. Still, it was about half the time Odorizzi is used to.

"I was caught off guard by it, obviously," Odorizzi said. "I didn't know what was going on. ... My typical routine is out the window at that point. I think all things considered -- I'm sure it felt like forever for you all -- but for me, that was about the fastest I can warm up.

"Usually, it takes me 30-plus minutes, and I think I did it in under 15, so not ideal, and it's not like it's a fun warm-up. You're sitting there pretty much naked in front of the other team. They get to watch every single pitch you're throwing."

Odorizzi ate up four innings after the Devers grand slam, but the game was already out of hand.

Jose Urquidy will start Game 3 for Houston on Monday, but after that, the Astros need a new plan. After McCullers was declared out due to a forearm ailment, Baker said his offense needed to pick up the slack. He was asked the same after the Garcia injury.

"Do some more [on offense]," Baker said with a half-smile. "You don't have much choice, so we just have to do some more. That's all."
Report a correction or typo
Related topics:
sportsespnnewsluis garciaboston red soxmlbhouston astros
Copyright © 2022 ESPN Internet Ventures. All rights reserved.
TOP STORIES
Deputies escort body of fallen HCSO Sgt. to funeral home
LIVE: Biden, Breyer make announcement as justice set to retire
Armed driver was trying to rob another driver on Katy Fwy, police say
These jobs are hiring, and they pay more than $14 an hour
Cool temps through the weekend with a warm-up next week
K9 stabbing suspect accused of killing father with dumbbell
No bond granted for suspect in Pct. 5 corporal ambush killing
Show More
Attorney of man questioned in dad's death wants him to seek help
HPD officer's bodycam video released in crash that killed 75-year-old
You could get paid to get your COVID vaccine or booster
World remembers Holocaust as antisemitism rises in pandemic
Notorious gangster reflects 30 years after becoming FBI informant
More TOP STORIES News