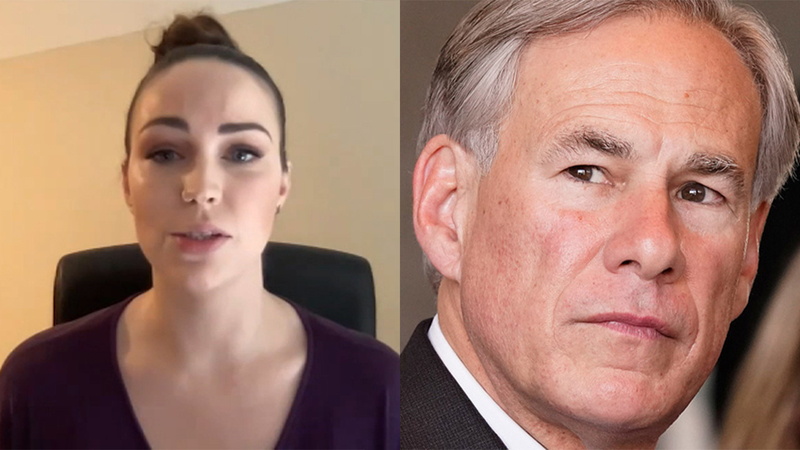 HOUSTON, Texas (KTRK) -- Texas Senate Bill 8 has been in effect for a week. The bill prohibits abortions once a heartbeat can be detected and does not make exceptions for rape or incest.

On Tuesday, when asked about the lack of rape exceptions in the bill, Gov. Greg Abbott responded in part saying, "Rape is a crime, and Texas will work tirelessly to make sure that we eliminate all rapists from the streets of Texas by aggressively going out and arresting them and prosecuting them and getting them off the streets."

Rape survivors and victims' advocates spoke with ABC13 on Wednesday and said while the governor's idea sounds great, it would be a very complex task

"We too want to eliminate rape. Our goal is to end sexual violence of any and all kinds, and I love that he is making that a top priority," said Emilee Whitehurst, the CEO of the Houston Area Women's Center.

Whitehurst said the reality is it's not about "getting [rapists] off the streets" since a majority of rapes are committed by a person the victim knows.

"The bulk of those crimes are committed by people that we know, so it's not a matter of hunting the rapists down and getting them off the streets," explained Whitehurst. "They are teachers, they are pastors, they are our husbands, [and] they are our boyfriends. The relational dynamics that are at play when you've been assaulted by someone, and it results in a pregnancy are very challenging."

Raquel Fatiuk, a rape survivor who now advocates for sexual assault victims, said the new law is simply not right.

Texas Right to Life designed a site for people to anonymously report abortions, but a Texas teen garnered millions of viewers and crashed the site. Why she says she is fighting for women.

"It is stressful and confusing and it is one of the most traumatic things probably anyone can experience, and so to add any sort of additional pressure is just alarming and not fair," she said.

"It's a little bit of a slap in the face, because he said, you know, eliminate rape in the streets, and rape really isn't in the streets," she said. "It's not the Boogeyman hiding in a bush. It's people we know. People that are acquaintances."

ABC13 reached out to Abbott on Wednesday to ask him more about his plans to eliminate rape in Texas. However, he was not made available for an interview.

When it comes to the future of SB 8, we spoke with Seth Chandler, a law professor at the University of Houston, about how likely it is for the bill to be challenged.

"The law seems to have scared abortion providers from even trying to challenge it through the Texas Supreme Court system," he said. "At some point though, however, I believe you're going to see a Rosa Parks. You are going to see someone stand up and say, 'I think this law is wrong. It's unconstitutional.'"

Ultimately, Chandler does not believe the law will hold up in the Supreme Court.